LIVESEY, a township in Blackburn parish, Lancashire; on the river Darwen, the Leeds and Liverpool canal, and the Lancashire and Yorkshire railway, at Cherry-Tree r. station, and 2½ miles SW of Blackburn Acres, 1,890. Real property, £12,145. Pop. in 1851, 2,649; in 1861, 3,581. Houses, 674. The increase of pop. arose from addition to the number of cotton mills, which are extensive. Livesey Hall, and the greater portion of the land, belonged formerly to the Livesey family, now extinct; and it passed by sale, in 1802, to the family of Feilden. The Leeds and Liverpool canal here crosses the river Darwen by a fine one-arched aqueduct. The township is nearly co-extensive with the chapelry of Feniscowles; the church of which was built in 1836, is partly in the pointed style and partly in the Tudor, and has a tower and spire. A national school, at Waterloo, is used as a chapel of ease. An Independent chapel at Mill-Hill is a recent and handsome erection; and contains about 1,000 sittings. The previous chapel is now used as a school-house. A mechanics' institute was established in 1853.

Details about the census records, and indexes for Livesey.

The Register Office covering the Livesey area is Blackburn.

You can see pictures of Livesey which are provided by:

"FENISCOWLES, (or Feningscowles), a hamlet in the parish and hundred of Blackburn, county palatine Lancaster, near Blackburn, within which borough it is included. The living is a perpetual curacy in the diocese of Manchester, value £180, in the patronage of the vicar of Blackburn.

"LIVESEY, a township and ecclesiastical district in the parish of Blackburn, and lower division of the hundred of Blackburn, county palatine of Lancaster, 3 miles S.W. of Blackburn, and 8 S.E. of Preston, its post town. It includes the hamlets of Feniscowles and Waterloo, with other small places. There are large cotton mills, collieries, flour mills, tannery, and works for the manufacture of drain pipes and articles made from fire-clay, &c. The living is a perpetual curacy in the diocese of Manchester, value £150, in the gift of the vicar of the parish. The church is a Gothic edifice, called Emmanuel's. The Independents have a chapel, to which' is attached a day school. There is a good National school for both sexes; also Sunday-schools. In this township are Mill Hill House, Park House, and several other good residences. John Fielden, Esq., is lord of the manor."

FENISCOWLES, a chapelry in Blackburn parish, Lancashire; near Blackburn. It was constituted in 1842; and its post town is Blackburn. Rated property, £9,833. Pop., 3,501. Houses, 640. The property is divided among a few. Feniscowles House is the seat of Sir William H. Feilding, Bart. The living is a vicarage, united with the p. curacy of Livesey, in the diocese of Manchester. Value, £215. *Patron, the Vicar of Blackburn. The church is good.

In 1835 Livesey was a township in the parish of Blackburn.

You can see the administrative areas in which Livesey has been placed at times in the past. Select one to see a link to a map of that particular area. 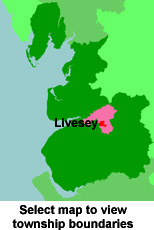 View maps of Livesey and places within its boundaries.