LYDIATE, a village and a chapelry in Halsall parish, Lancashire. The village stands near the Leeds and Liverpool canal, 2¾ miles W of Town-Green r. station, and 4¼ SW of Ormskirk; and has a post office under Ormskirk. The chapelry comprises 1,995 acres. Real property, £6,018. Pop., 848. Houses, 152. The property is divided among a few. The manor belongs to T. W. Blundell, Esq. Lydiate Hall is now a farmhouse. Lydiate abbey was in the course of erection at the Reformation; was left uncompleted at the dissolution; and is now a fine ivy-clad ruin, including S wall and castellated tower. The living is a p. curacy in the diocese of Chester. Value, £150. Patron, the Rector of Halsall. The church was built in 1841; is in the pointed style; and comprises two aisles and a chancel, with a pinnacled tower. A Roman Catholic church was built in 1853; and consists of nave, three aisles, and chancel, with tower, and spire. There are a parochial school and a Roman Catholic school.

Details about the census records, and indexes for Lydiate.

The Register Office covering the Lydiate area is Sefton South.

You can see pictures of Lydiate which are provided by:

"LYDGATE, a township in the parish of Halsall, hundred of West Derby, county palatine of Lancaster, 4 miles S.W. of Ormskirk, its post town. The Leeds and Liverpool canal passes through the township. The village, which is considerable, is situated near Halsall Moss, which is famed for its "fit-turf," used in the manufacture of candles. The living is a perpetual curacy in the diocese of Chester, value £73, in the gift of the rector of the parish. The church is a Gothic structure, with a square tower surmounted by pinnacles. The Roman Catholics have a church, built of stone, with a tower and spire, and window of stained glass. There is a Roman Catholic school. Here are extensive ruins of Lydiate Abbey, which at the time of the Dissolution was in an unfinished state. Lydiate Hall is now a farm."

In 1835 Lydiate was a township in the parish of Halsall.

You can see the administrative areas in which Lydiate has been placed at times in the past. Select one to see a link to a map of that particular area. 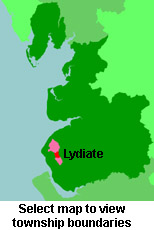 View maps of Lydiate and places within its boundaries.