MAGHULL, a township-chapelry in Halsall parish, Lancashire; on the Leeds and Liverpool canal, and on the Liverpool and Ormskirk railway, 5 miles SSW of Ormskirk. It has a station on the railway, and a postoffice under Liverpool. Acres, 2,073. Real property, £8,439. Pop., 1,144. Houses, 196. The property is much subdivided. Maghull Hall is the seat of B. French, Esq.; Manor House, of H. M'Elroy, Esq.; and Moss-Side House, of T. Harrison, Esq. The living is a p. curacy in the diocese of Chester. Value, £155. Patron, the Rector of Halsall. The church is a good plain edifice, of varions dates. There are a national school, and charities £4.

Details about the census records, and indexes for Maghull.

The registers of the parish church, St Andrew, have been published by the Lancashire Parish Register Society as follows.

The Register Office covering the Maghull area is Sefton South.

You can see pictures of Maghull which are provided by:

"MAGHULL, a township and chapelry in the parish of Halsall, hundred of West Derby, county palatine of Lancaster, 5 miles N.W. of Ormskirk, its post town. The Leeds and Liverpool canal passes through the township, as does also the western section of the Lancashire and Yorkshire railway, which has a station here. The land is nearly evenly divided between arable and pasture. The living is a perpetual curacy's in the diocese of Chester, value £155, in the patronage of the rector of the parish. The chapel, which is an ancient edifice, has been repaired and enlarged. There is a school with an endowment of £12 per annum."

In 1835 Maghull was a township in the parish of Halsall.

You can see the administrative areas in which Maghull has been placed at times in the past. Select one to see a link to a map of that particular area. 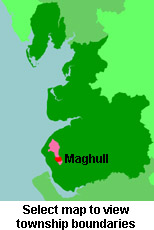 View maps of Maghull and places within its boundaries.