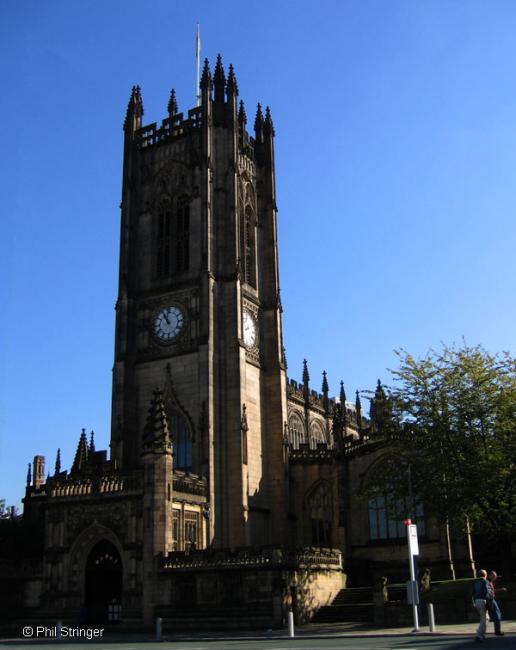 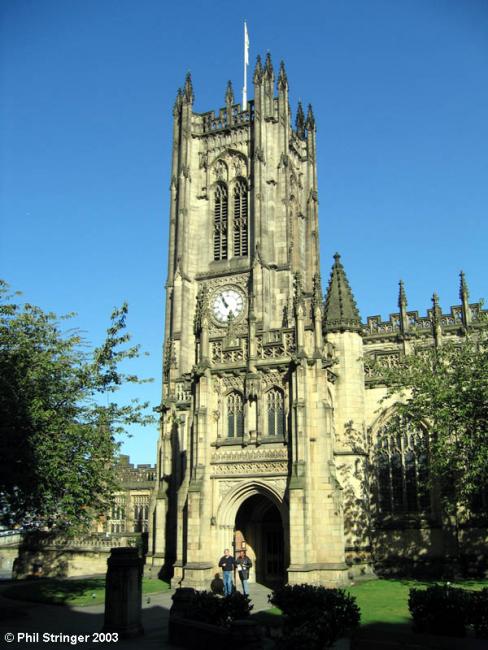 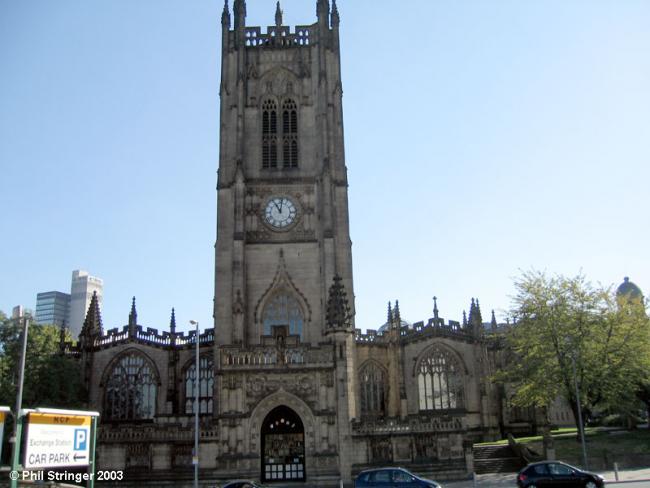 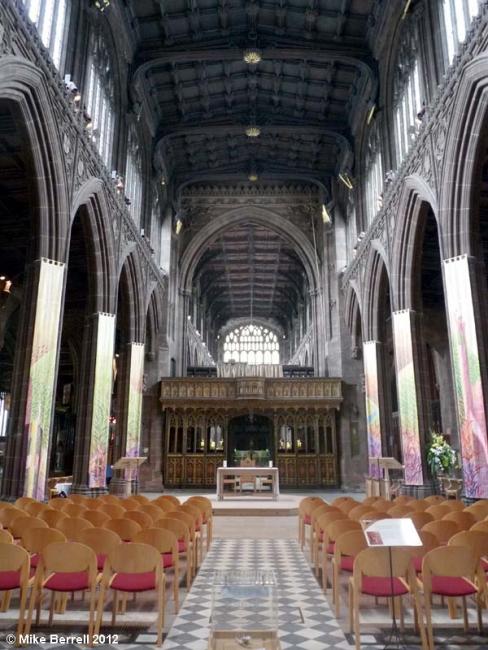 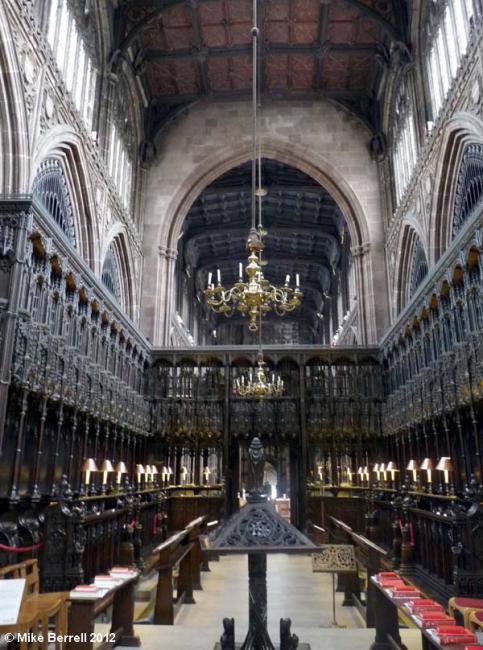 "The Cathedral.- St. Michael's church, which long ago disappeared, was the earliest church in Manchester. St. Mary's church, at Hunts Bank, close to the Irwell, on a site now nearly midway between Victoria railway station and the Royal Exchange, was probably the other of the two churches which existed at Domesday; served long as the parish church; acquired a new Lady chapel and a W tower about 1330; was converted in 1421 into a collegiate church, under the name of the College of the Blessed Virgin Mary, by Lord Delawarr, who became rector in 1382; was, soon afterwards, rebuilt of stone; was still further enlarged and enriched in the years 1485-1509; and, under the name of Christ Church, was made the cathedral of the newly constituted diocese of Manchester in 1847. The cathedral is 232 feet long, and 130 feet broad; consists chiefly of late perpendicular English architecture; comprises a W tower, a nave of six bays, a choir of six bays. a small Lady chapel, a number of lateral chapels, and a chapter-house; and underwent extensive restorations, at a cost of about £40,000, during a series of years ending in 1867. The lower part of the tower was built about 1330, the upper stage about 1520;. rose to the height of 120 feet; was richly ornamented toward the summit; had the reputation of being one of the finest towers in England; went eventually into such decay that one or two of its pinnacles looked every moment as about to topple over; was begun to be reconstructed from the foundation in August 1864; was finished externally in May 1867; is now 15 feet higher than the old tower; and has a clock chamber and a belfry for a fine pea1 of 10 bells. The tower will be finished interiorly in Sept. 1867. It is constructed of millstone grit, of which it contains 70,000 feet, or 5,000 tons. The nave was commenced in 1465, completed with basement and aisles in 1490, and clerestoried and re-roofed in the 17th century; has a central and two side aisles on the N and S, with lateral chapels or chantries opening into the S aisle; has no triforium; and is roofed with timber, panelled, and resting on corbels carved into figures of angels playing on musical instruments. The chapels of the nave are St. George's or Brown's on the SW, built about 1500; St. Nicholas's or Trafford's on the SE, built about 1506; and St. James's or Strange way's on the NE, originally a transept, built in 1440. The choir was built, to the extent of basement and aisles, in 1440; was constructed on a design that the church should be cruciform;. acquired stall-work on the S, a clerestory, and surmounting octagonal turrets about 1500; has no triforium: and includes an E procession-path, and four lateral chapels or chantries. These chapels are St. John Baptist's or the Derby chapel on the N, built in 1513, with a small mortuary chapel adjoining it to the N; Jesus' or Byrom chapel on the S, built in 1506; and Hulmes' mortuary chapel, also on the S. The Lady chapel, called also StMary's or Chetham chapel, was built in 1330; was altered by Warden West, and again in the 17th century; and underwent restoration in 1865-6. The chapter-house was built about 1500. The cathedral, in the interior view, is very fine; the nave, with its lateral chapels, resembling Chichester; the choir remarkably beautiful and picturesque; the painted windows striking and curious; and the effigies and monuments highly interesting. One monument is to Mrs. F. Hall, who left £40,000 for local charities; and another is a marble statue by Theed of Humphrey Chetham."

Transcripts of the Monumental Inscriptions are held in Manchester Archives and Local Studies, Manchester Central Library.

The Cathedral is dedicated to St Mary, St Denys and St George. It was built in 1421 and was known as the Collegiate Church until it became the cathedral in 1847. It was also known as Christ Church in the early 19th century.

A substantial amount of information about the cathedral was recorded by John Owen in the Owen Manuscripts.

Some pictures of Manchester Cathedral, made available by Ian Rhodes:-

The reason for the large number of marriages in the cathedral

Under the requirements of Lord Hardwicke's Act only those marriages (other than those of Quakers and Jews) celebrated in the established church were valid. The Collegiate Church of Manchester was the parish church for the parish of Manchester. Not only was the parish geographically quite large, there was an explosion in the population during the 18th and early 19th centuries. As a result there were insufficient churches.

By 1839 there were at least 27 consecrated chapels and churches within the Parish of Manchester. Of these St. George's, Hulme, St. Philip's, Salford, and St. Matthew's, Campfield, had districts assigned to them and were authorized to celebrate marriages. It was not, however, until 1847 with the creation of the See of Manchester and the rise in status of the Collegiate Church from parish church to cathedral that the controversy was finally resolved.

The Owen Manuscripts available at Manchester Archives and Local Studies, and Lancashire Record Office contain an index to: