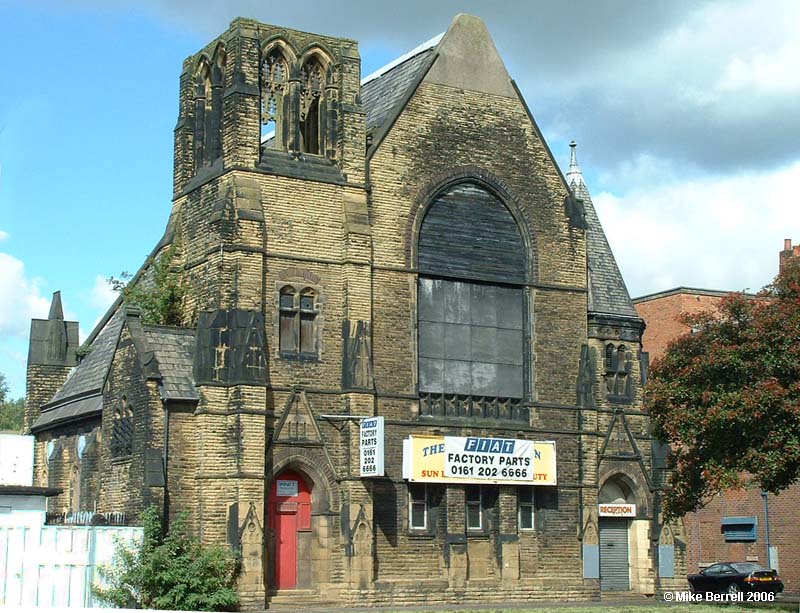 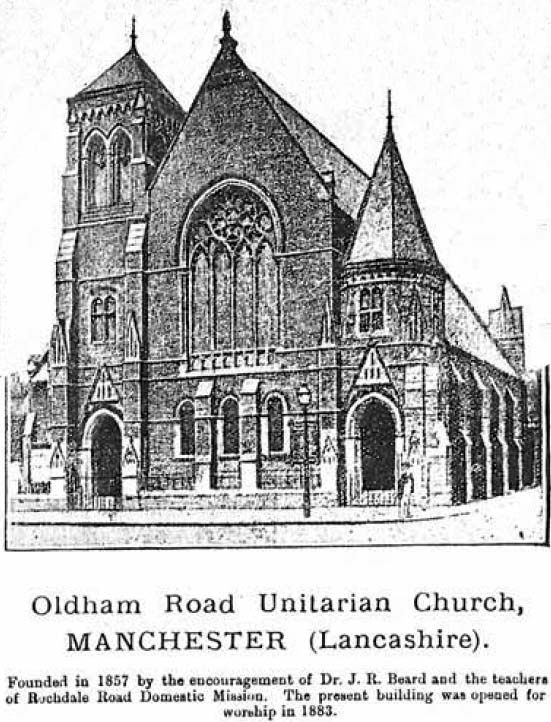 NEW UNITARIAN CHURCH IN MILES PLATTING. The foundation stone of a new Unitarian Free Church was laid on Saturday in Oldham Road (near Collyhurst-street) in this city, the ceremony being performed by the Rev. W. Gaskell. By the plans the church to be erected occupies a well-elevated site fronting Oldham Road. The style of architecture is Gothic, and the building is faced externally with parpointstone, the ashlar and moulded work being from the Halifax quarries. Large tracery windows decorate the chancel and main front, which is also flanked by a tower to be used as a staircase entrance to the gallery over the vestibule. Sitting accommodation is provided for 400 people in the body, gallery, and chancel. Organ chamber, clergy vestry, and meeting room are provided, as well as store cellar, heating chamber, and offices. The whole of the interior fittings are in varnished pitch pine, and the roof, which is clear span, is open timbered. The heating is by hot water, and the lighting by means of coronas, lamps, brackets, and standards. The entire cost, including site, organ, &c., will be £5,500. The work is being carried out by Mr. A. W. Smith, architect, of Mosley-street, in this city. As the result of a limited competition, the contractor for the work is Mr. W. W. Harrison, of Greenheys. The ceremony was preceded by a procession, headed by a brass band from the Miles Platting Unitarian Church, Varley-street, Oldham Road, which went by a devious route to the site of the new building, Amongst the gentlemen present were the Rev, W. Gaskell, the Rev. W. G. Cadman, Rev. W. Mitchell, Rev. R. Pilcher, Rev. Jos. Freeston, Rev. Silas Farrington, Rev. J. Harwood, Rev. J. G. Slater, Rev. J. M'Dowell, Rev. C. T. Poynting, Rev, James Harrop, Mr. B. Heap, Mr. C. E. Schwann, Mr. Harry Rawson, Mr. John Dendy, Mr. John Coleman, Mr. H. Whitley, Mr. G. W. Rayner Wood, Mr. Alderman Bowes, Mr. Ben Brierley, and Mr. James Burgess.- Mr. Burgess, on behalf of the Building Committee, delivered an address, comparing the present condition of Unitarianism with that of 35 years ago. A public meeting was held in connection with the day's ceremony in the Varley-street Chapel in the evening.

New Unitarian Church. - On Wednesday afternoon a new Unitarian Free Church was formally opened in Oldham-road, nearly opposite the well known church of St. John's, Miles Platting. The foundation stone of the new structure was laid by the Rev. W. Gaskell, M.A., in October last. It is of Gothic architecture, built from designs by Mr. A. W. Smith, architect, of this city, and consists of nave, with open timbered roof, chancel, organ chamber, pulpit, gallery to seat 60 persons, vestibule, &c. The front to Oldham-road has rather a fine appearance, being flanked by two square towers, one of which rises to a considerable elevation. The total seating accommodation is 400. The cost of the new church is upwards of £5,000, the whole of which sum has been raised by the aid of bazaars and by subscription. Formerly divine service by the congregation which will now assemble at this church was carried on at the chapel in Varley street, which is still being used as a school. A vacant plot of ground, however, has been secured close to the new church, upon which schools will hereafter be erected, when the old chapel will be disposed of. It is now about 12 years since the Rev. W. G. Cadman commenced his ministerial labours at the Varley-street place of worship. He will now have charge of the new church. The dedicatory services on Wednesday, which were attended by a crowded congregation, many persons being unable to obtain seats, were conducted by the Rev. W. Gaskell, M.A., and the Rev. W. G. Cadman. The sermon was preached by the Rev. Charles Beard, B.A. Mr. Jas. Crompton, organist of St. George's, Bowdon, presided at the temporary organ, and during the afternoon played selections from Guiraud, Guilmant, and Handel. The anthem was " I was glad when they said unto me, we will go into the House of the Lord." The service was followed by a tea. In the evening a public meeting was held.