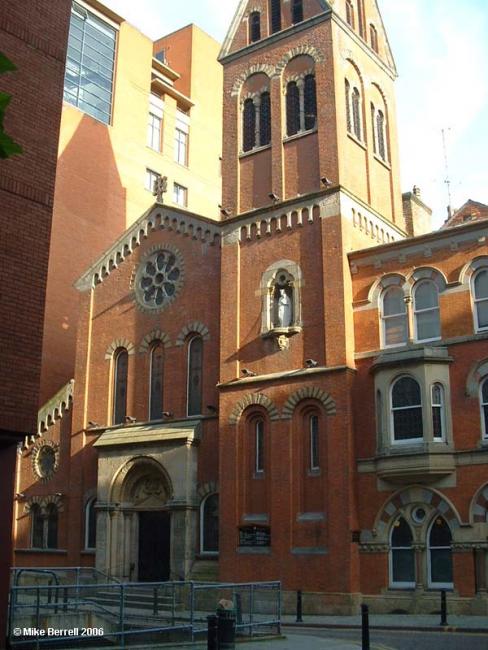 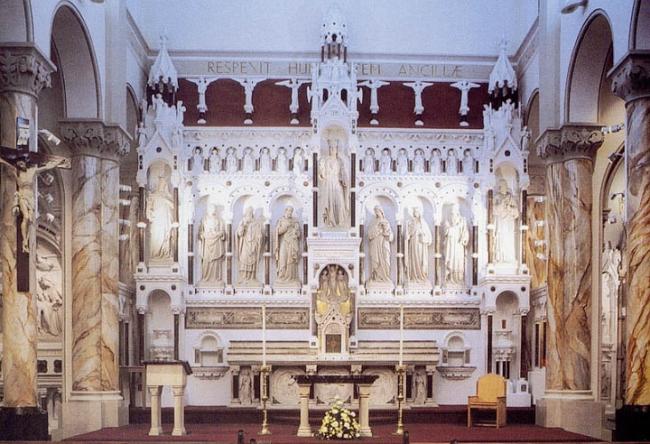 If there were ever once on a time mulberry trees in this locality, they have long since been forgotten. Today the handsome church of unusual shape and style is hemmed in by tall, grimy warehouses and offices. Only the initiated know where to find it, so well does it deserve the name of "the hidden gem."

This is the second oldest church in Manchester, as it was founded from St. Chad's, Rook Street, later transferred to Cheetham Hill. In 1794 Father Rowland Broomhead, Rector of St. Chad's, bought a plot of land near a place called Ridgefield, and proceeded to build St. Mary's. Father E. Kenyon, a Lancashire priest, who had been assistant to Father Broomhead, became the first Rector. When Pleasington Priory was built in 1816, Father Edward Kenyon, who had been at Douay with Mr. Butler, the founder of the church, left to take charge there.

Father Thomas Lupton was Rector of St. Mary's from 1816 to 1822. His assistants were Joseph Curr, John Ashurst, F. Crowe, Henry Gillow, Michael Trappes and Richard Abbott. Fr. Ashurst and Fr. Gillow both died of one of the epidemics that constantly ravaged the poorer quarters of the city.

The growth of the Catholic population can be seen from the baptismal registers. In 1816 there were 242 baptisms; in 1822 there were 490, in spite of the fact that St. Augustine's parish had already been founded. How many people lie buried around St. Mary's would be difficult to say, but the cemetery was open from 1816 to about 1829.

Father Henry Gillow was Rector from 1822 to 1837. An unfortunate accident occured during his rectorship. In 1833 he had determined to have the chapel reroofed and decorated. Instead of calling in an architect he relied on the help of some of the men in the parish who were in the building trade. Light for the church was provided by a large dome. On Saturday, August 8, 1835, Father Gillow noticed that the dome was beginning to crack, and that same night it crashed with part of the roof into the church. Meanwhile Fr. Gillow had arranged to have Mass in the school at Lloyd Street. (These school buildings were pulled down later to make room for the Town Hall.) Fr. Gillow did not long survive the disaster to his church and fell a victim to the fever when ministering to the sick in the crowded slums of his parish.

From 1838 to 1845 there is a quick succession of names-Father J. Billington, Father J. Boardman, Father Seddon, Father Vincent Eyre, and Father Gerald Ward.

In 1844 Father Mathias Formby, who became well-known later as Canon Formby of Stretford, set about the building of a new church. He is supposed to have drawn his inspiration for the style of the church from Spain. The church was opened in 1848. Fr. Formby enriched his church with a beautiful high altar.

From 1863 to 1869 the mission was administered by Father Richard Gerrard and Father John Newton, who became Missionary Rector in 1869, and worked here until he was appointed to St. Alban's, Blackburn in 1885. He did much to beautify the church and to give it its characteristic devotional atmosphere. In spite of the difficulty of the site, Fr. Newton built the presbytery more or less as it is today.

From 1885 to 1888, Father John Burke was Rector, but left to join the Redemptorist Fathers. Father O'Dwyer was the next Rector, and he made various restorations to the fabric. The centenary was worthily celebrated in 1895, when the Bishop preached on the progress of Catholicity during the past century.

Canon "Tom" Walsh, who had been for some time here as a curate, returned as Rector in 1898. He was faced with a heavy burden of debt, because the numbers in the parish had been steadily decreasing, as people moved away from the business area of the city. The diocese at one time considered that it would be better to close down the church and realise the value of the land to pay the debt on the mission. However, Canon Walsh had the view that it would be scandal to give up such a link with the past as St. Mary's, and he had the wisdom to see that a Catholic church in the heart of the City's business world was a precious asset, which would be more appreciated as time went on. There is no doubt that it was through his ministry that Mulberry Street became established as a great spiritual power-house not only for Manchester, but for clergy and layfolk from many parts of England. One priest, who knows the church well, has stated that God is worshipped here more than in any other place in England. Throughout the day there are people who come to pray here, and on Holy Days there are great crowds at Mass.