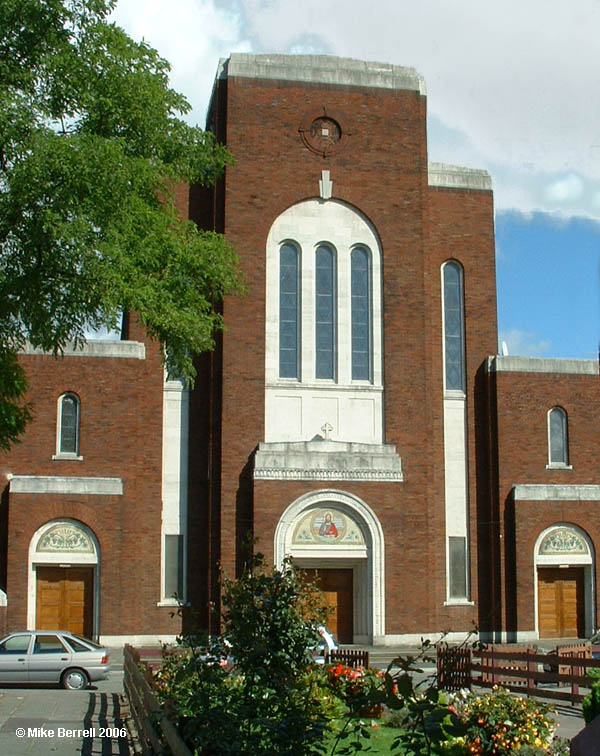 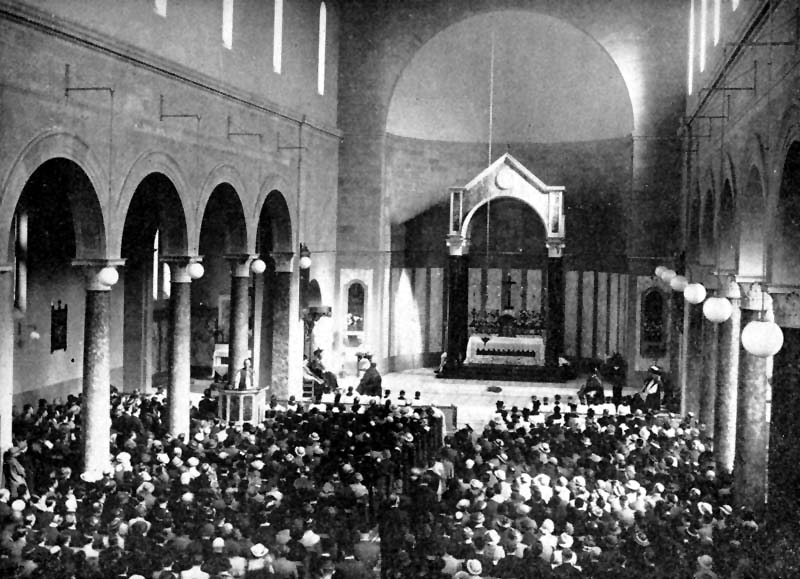 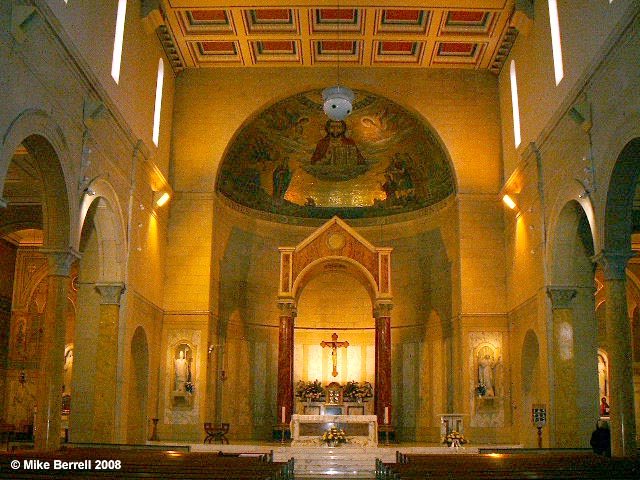 It is fitting to record that on the February 29, 1832, the first Catholic Church in Manchester after Catholic Emancipation was dedicated to St. Patrick, and stood in the green fields of Livesey Street. The memory of old St. Patrick's will die hard. Its structure has gone now. But parishioners still talk with affection of this square cruciform church with its galleries, that cradled their faith for over a hundred years. They talk of the clock and the tower and the bells built in defiance of the law. How their hearts must have bled when they saw it disappear brick by brick under the demolisher's hammer. But they can still see its familiar outlines in the stained glass window of the Lady Chapel of the new St. Patrick's. It is recorded that all this was possible by the generous donation of £4,000 by Captain Heatley of Brindle.

From the walls of the Conference Room of St. Patrick's Presbytery looks down the portrait of Fr. Daniel Hearne. In his white cravat (for the Roman collar was not worn in those days in England) he bears a striking resemblance to that great Catholic layman and contemporary, Daniel O'Connell. As the first Rector of St. Patrick's, he was to see the number of Catholics grow rapidly. The green fields surrounding St. George's Road, now Rochdale Road, were to be covered with houses. In 1835, the parish, which included Failsworth, Harpurhey and Blackley, numbered 30,000 souls. Fr. Hearne was a man of striking personality. His faith was not just intellectual conviction, but must be displayed outwardly at all times. He was a priest of the people. When he left St. Patrick's in 1846, to stay for a short time in the Liverpool suburbs, and to die in a tragic scaffold accident in America, he carried in his memory unforgettable scenes of farewell affection.

To step into the shoes of Fr. Hearne was the unenviable position of the Rev. Doctor Roskell, the second Rector of St. Patrick's. In such a position, a man has to rise to great heights. For parishioners tend to enshrine the memory of a priest they have known and loved, and unwittingly consider his successor as an intruder. By his wisdom and holiness, Dr. Roskell steered St. Patrick's through a stormy period, until 1851. His merits were recognised by the Holy See in appointing him Bishop of Nottingham. The memory of his successor, the Rev. Edmund Cantwell, is immortalised in the fact that for 32 years he was at St. Patrick's. For six years as a curate and twenty-six as Rector. For those who realise, the million and one exacting duties of a Rector of a large parish, it can only be a source of wonder at his faith, courage and endurance. The monumental work he must have covered in that time would need a volume to record adequately. He lies buried in his native Clonmel, Ireland, where he died in 1851. (This may not be correct, a marriage certificate dated 6/12/1852 states the couple concerned were married by the Rev. Edward Cantwell.) There followed three Administrators:- Canon George Richardson from 1877-1881 and thence to gain fame elsewhere. Then the Rev. M. Sheehan 1881-1885, followed by the Rev. David Forbes 1885-1892, who was a Doctor of Medicine. The names of succeeding Rectors, indeed of all, are to be found commemorated on a stone slab in the porch of the new St, Patrick's.

They read: The Very Rev. Canon Mussely (1893-1905); Very Rev. Dean Hennessey (1905-1911); Rev. Laurence Cassidy (1911-1922); Rev. John Connor (1922-1929), To this list still to be added are the names of Very Rev. Canon Maspero (1929-1947) and the present Rector, Very Rev, Dean Earley, d.d. Still living as parish priest of St. Mary's, Levenshulme, is the Very Rev. Canon Maspero. Under his careful planning the present beautiful. Church of St. Patrick took shape. The more one sees the Church the more one realises its perfect proportions. Between the Church and the Girls' School is the convent of Presentation Nuns. From Clonmel in Ireland came three nuns in 1836 to a house built by Patrick Lavery, who gave £2,000. If their convent has none of the spacious gardens of other foundations, it is compensated by its spirit.

But what of the sons of St. Patrick's who have gained public prominence? Names like the Rt. Rev. Bishop Henshaw of Salford, and bearded Bishop Hanlon of Teos, spring easily to the mind. Among the laymen, who can forget Sir Daniel McCabe, Lord Mayor of Manchester, and Mr. Leslie Stuart, author of Floradora and creator of the immortal ''Lily of Laguna'' ? That thirty scholars of St. Patrick's have been raised to the dignity of priests is not with out spiritual significance. The true worth of a parish is judged by its spiritual activities. St. Patrick's does not fear an unfavourable sentence. The people still talk of the thousands that used to queue for Mass on Sunday. They still recall that, when the Men's Con fraternity met, all traffic was held up until the men filed into Church. They did not think it unusual that frequently as many as 21 babies would be baptised In one day.

The sons of St. Patrick's are scattered over the five continents. From America, Canada, Australia, South Africa come, almost every week, letters from old parishioners. Another feature is that scattered parishioners still come long distances on Sunday to attend Mass in their old Church.

One morning in the year 1900 Sir Daniel McCabe escorted Pope Pius XI (then Fr. Ratti) to St. Patrick's Rectory. That the 257th successor of St. Peter should have trodden the pavement of Chapman Street, Rochdale Road, and Oldham Road makes this hallowed ground. In his footsteps came later Cardinal Bourne in 1914 and Archbishop Downey at the Centenary. Fr. Theobald Matthew, the apostle of temperance, saw a vast concourse take the pledge when he preached at the installation of the new organ. Fr. Tom Burke, the famous preacher, preached in St. Patrick's on behalf of the orphan age at Longsight. It is worthy to end the list of distinguished visitors to the Church with the name of the man who made it possible for the Catholic Church to grow in England-Daniel O'Connell. To St. Patrick's he made one visit.

Every parish has its growing pains. St. Patrick's is no exception. After the departure of Fr. Hearne, owing to an unfortunate dispute, the parish was split with dissension. But, by the providence of God, there came to Manchester at that time the famous missioner of the Order of Charity, Fr. Gentili, D.D. A man of Roman birth and of striking personality, he was persuaded to come from St. Wilfrid's, Hulme, to give a mission at St. Patrick's. So began the famous mission which lasted seven weeks. The mission opened with stormy scenes. But Fr. Gentili's Christlike gentleness and perseverance brought the much-desired peace and concord. It is recorded that 190 converts were received during this mission.

The stranger may ask if the spirit of the pioneers of 1832 has been lost in the course of a century. The parishioner has only to point to the towering mass of the Church and say ''there is your answer". There it stands, a testimony to that pioneer spirit that has grown strongly with the years. A Church that was built and consecrated in the same year. We all know that it is usual after a period of years (often 25, sometimes 50) for a church to be free from debt. That it should be free of debt in the year of its erection is the highest compl iment you can pay to a parish. How was it done? In the centenary year of 1932 it was announced t£hat £8,000 had been collected towards the cost of the new church. The estimated cost of the new church was £30,000 and with the rising cost in materials would be finally about £40,000. So to free the church from debt in time for its opening in 1937 the sum of £30,000 would have to be obtained in the space of four years. The parish set out to do the apparently impossible. Encouraged by the enthusiasm and unflagging energy of the clergy-the name of Fr. Yarnitzky must be mentioned in this connection the people of the parish determined that nothing should deter them.

So, in this Holy Year of 1950, St. Patrick's looks back with honest pride over one hundred and eighteen years of history. Even today the large number of men, and children taken from the 1,100 in the school, draw enthusiasm from the watchers in the Whit Friday procession. Ten years of war have taken their toll. The evils war brings are being rooted out and old traditions and old fervour are being renewed. It is true that the vast number of houses must come under the demolisher's hammer. Every day means that parishioners reluctantly leave their beloved parish, yet even now, with its population 7-8,000 it is one of the largest parishes in the diocese.