MAWDESLEY, a township and a chapelry in Croston parish, Lancashire. The township lies on a branch of the river Douglas, 2 miles E by S of Rufford r. station, and 6 WSW of Chorley. Acres, 2,887. Real property, £5,364. Pop., 912. Houses, 169. The manor belongs to Sir Thomas Hesketh, Bart., and John R. De Trafford, Esq. Mawdesley Hall is an ancient mansion, on a sandstone rock; was formerly the seat of the Mawdesley family; and is now the residence of P. Blundell, Esq. The chapelry is more extensive than the township, and was constituted in 1843. Post-town, Ormskirk. Pop., 1,189. Houses, 217. The living is a rectory in the diocese of Manchester. Value, £165. * Patron, the Rector of Croston. The church was built in 1840; is in the early English style; and consists of nave only, with tower and small spire. There are chapels for Wesleyans and Roman Catholics, a national school, a free school, and charities £4. The R. Catholic chapel was built in 1830; is a handsome edifice, with 500 sittings; and has attached to it a large burying-ground.

Details about the census records, and indexes for Mawdesley.

The Register Office covering the Mawdesley area is Chorley.

You can see pictures of Mawdesley which are provided by:

"MAWDESLEY, a township in the parish of Croston, hundred of Leyland, county Lancaster, 7 miles from Ormskirk, its post town, 8 W. by S. of Chorley, and 2 from the Rufford station on the East Lancashire railway. The village, which is small, is situated on a branch of the river Douglas, and is wholly agricultural. The soil consists of stiff clay. The living is a perpetual curacy in the diocese of Manchester, value £150, in the patronage of the Rector of Croston. The church, dedicated to St. Peter, is a stone structure built in 1840. It has a small spired tower containing one bell. There is a National school for both sexes, in, which a Sunday-school is held. There are schools and places of worship for he Roman Catholics and Wesleyan Methodists. Mawexley Hall, still the principal residence, was formerly the family seat of the Mawdesleys. It is situated on a rock of red sandstone. Courts leet and baron are held annually at Michaelmas by Sir Thomas Hesketh, Bart., and John Randolphus de Trafford, Esq., who are the lords of the manor and principal landowners."

In 1835 Mawdesley was a township in the parish of Croston.

You can see the administrative areas in which Mawdesley has been placed at times in the past. Select one to see a link to a map of that particular area. 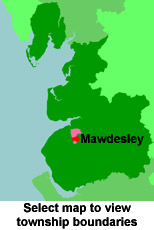 View maps of Mawdesley and places within its boundaries.