MELLING, a township-chapelry in Halsall parish, Lancashire; on the Leeds and Liverpool canal, adjacent to the river Alt, and to the East Lancashire railway, 1 mile SE of Maghull r. station, and 7 NNE of Liverpool. It has a postal letter-box under Liverpool. Acres, 2,120. Real property, £5,430; of which £100 are in quarries. Pop. in 1851, 662; in 1861, 728. Houses, 126. The chief landowners are Lord Skelmersdale, the Earl of Derby, and T. W. Blundell, Esq. The living is a p. curacy in the diocese of Chester. Value, £120. Patron, the Rector of Halsall. The church was rebuilt in 1834; is in the pointed style; and contains several handsome tablets. There are a national school, with £25 a year from endowment, and a Roman Catholic school.

Details about the census records, and indexes for Melling in Halsall.

The Register Office covering the Melling in Halsall area is Sefton South.

You can see pictures of Melling in Halsall which are provided by:

"MELLING, (or Melling-cum-Cunscough), a township in the parish of Halsall, hundred of West Derby, county Lancaster, 7 miles N.E. of Liverpool, its post town, and 6 S.W. of Ormskirk. The township, which is wholly agricultural, is situated on the Leeds and Liverpool canal. There are quarries of building stone. The living is a perpetual curacy in the diocese of Chester, value £120, in the patronage of the Rector of Halsall. The church was rebuilt in 1834; and is dedicated to St. Mary. The parochial charities produce about £28 per annum, of which £25 goes to the National school for both sexes. There is also a Roman Catholic school. The tithes were commuted in 1837 for £505.

"CUNSCOUGH, a chapelry in the parish of Halsall, in the county of Lancaster, 3 miles S. of Ormskirk. It is united with the township of Melling."

In 1835 Melling was a township in the parish of Halsall.

You can see the administrative areas in which Melling in Halsall has been placed at times in the past. Select one to see a link to a map of that particular area. 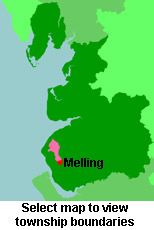 View maps of Melling and places within its boundaries.