MELLOR, a village, a township, a chapelry, and a sub-district, in Blackburn parish and district, Lancashire. The village stands 2½ miles NW of Blackburn r. station. The township contains also part of the hamlet of Mellor-Brook, which has a post office under Blackburn. Acres, 1,830. Real property, £4,080. Pop. in 1851, 1,668; in 1861, 1,398. Houses, 288. The decrease of pop. was caused by the removal of families to Blackburn. The manor belongs to the representatives of the late J. F. Hinder, Esq. Mellor House is the seat of H. Hargreaves, Esq. Mellor-Moor has traces of a Roman camp, and commands a fine view to the Irish sea. There are stone quarries and some mineral springs. A cotton mill is at Mellor-Brook, and hand-loom weaving is carried on. The chapelry includes also the township of Ramsgrave, and was constituted in 1842. Pop., 1,718. Houses, 351. The manor of Ramsgrave belongs to Lord de Tabley. The living is a p. curacy in the diocese of Manchester. Value, £150. Patron, the Vicar of Blackburn. The church was built in 1829, at a cost of £5,275; is in the pointed style; and consists of nave, aisles, and chancel, with tower and lofty spire. There are a Wesleyan chapel and a national school. The sub-district contains also the townships of Balderstone, Osbaldeston, and Clayton-in-le-Dale. Acres, 6,227. Pop., 2,863. Houses, 577.

Details about the census records, and indexes for Mellor.

You can see pictures of Mellor which are provided by:

"MELLOR, a township in the parish of Blackburn, lower division of the hundred of Blackburn, county Lancaster, 3 miles N.W. of Blackburn, its post town, and 7 E. of Preston. It is situated on the N. side of the new road from Blackburn to Preston. There is a Roman camp on the moor, also an extensive cotton-mill. A brisk trade is done in hand-loom weaving. There are some good stone quarries, and several mineral springs. The living is a perpetual curacy in the diocese of Manchester, value £150, in the patronage of the Vicar of Blackburn. The church, dedicated to St. Mary, is a modern stone structure, with a lofty spired tower. The parochial charities produce about £2 per annum. There is a National school for both sexes, in which a Sunday-school is held. Woodford Park is the principal residence. The representatives of the late J. F. Hindle, Esq., are lords of the manor and principal landowners."

In 1835 Mellor was a chapelry and township in the parish of Blackburn.

You can see the administrative areas in which Mellor has been placed at times in the past. Select one to see a link to a map of that particular area. 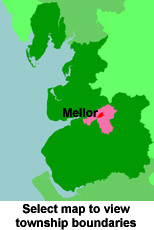 View maps of Mellor and places within its boundaries.