MITTON-HENTHORN AND COLDCOTES, a township in Whalley parish, Lancashire; at the confluence of the rivers Hodder and Ribble, contiguous to Great Mitton township, 2¾ miles SW of Clitheroe. Acres, 1,450. Real property, £970. Pop., 62. Houses, 10. The manor, with Mitton Hall, belongs to J. W. Aspinall, Esq. Mitton here is often called Little Mitton. A cotton mill is at Henthorn. An inn adjoins the bridge at the communication of Great Mitton, and is much frequented by anglers.

Details about the census records, and indexes for Little Mitton.

The Register Office covering the Mitton area is Ribble Valley.

You can see pictures of Mitton which are provided by:

"GREAT MITTON, (or Myton), a parish, chiefly in the wapentake of Staincliff, West Riding county York, but partly in the lower division of the hundred of Blackburn, county Lancaster, 3 miles W. of Clitheroe, its post town, and 2 S.E. of Whalley. It is situated at the confluence of the rivers Hodder and Ribble. The parish, which is very extensive, contains the townships of Great Mitton, Aighton, Grindleton, Waddington, Hurst-Green, Bailey, Chaigley, Bashall-Eaves, and West Bradford. Henry VI. was betrayed in this parish by the Talbots, and in 1319 it was the scene of dreadful slaughter and devastation, committed by the Scots on their irruption into England. The village, which is small, is wholly agricultural. The soil is clay, upon a subsoil of gravel and limestone. The living is a vicarage in the diocese of Ripon, value £180. The church, dedicated to Allhallows, formerly belonged to Cockersand Abbey, and was built in the reign of Edward III. It is a stone structure with a lofty square embattled tower containing five bells. The interior of the church has an ancient cross, and on the N. side of the chancel is the sepulchral chapel of-the Sherburne family. In addition to the parish church there are the following district churches, viz: at Grindleton, Hurst-Green, and Waddington, the livings of which are all perpetual curacies, varying in value from £122 to £85. The parochial charities produce about £9 per annum. There is a day school for both sexes, in which a Sunday-school is also held. John Welchman Aspinall, Esq., is lord of the manor, and owner of a considerable portion of the surface. Stoneyhurst, now occupied as a Roman Catholic college, was anciently the seat of the Sherburnes, commenced by Sir Richard Sherburne towards the close of the 16th century.

"LITTLE MITTON, a township in the parish of Whalley, hundred of Blackburn, county Lancaster, 3 miles S.W. of Clitheroe. It is situated at the confluence of the rivers Calder and Ribble, and contains the hamlets of Henthorn and Coldcotes. The inhabitants are wholly engaged in agriculture. Mitton Hall is the principal residence.

"HENTHORN, a hamlet in the township of Little Mitton, and parish of Whalley, county Lancaster, 2 miles S.W. of Clitheroe. It is situated near the junction of the rivers Calder and Ribble."

"COLDCOTES, a hamlet in the township of Little Mitton, in the county of Lancaster, 3 miles S.W. of Clitheroe."

In 1835 Mitton was a Lancashire township in the parish of Great Mitton in the West Riding of Yorkshire.

You can see the administrative areas in which Mitton has been placed at times in the past. Select one to see a link to a map of that particular area. 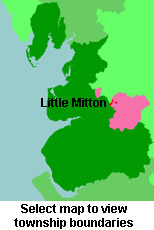 View maps of Mitton and places within its boundaries.