MOSSLEY, a town and a chapelry on the mutual border of Lancashire, Cheshire, and W. R. Yorkshire. The town stands on the river Tame, the Huddersfield canal, and the Manchester and Leeds line of the Northwestern railway, under Heartshead Pike, 3 miles NE of Ashton-under-Lyne; was originally a hamlet of Ashton-under-Lyne parish, all within Lancashire; has risen, since about 1840, into great manufacturing importance; was recently placed under the provisions of the local government act, and then defined to include portions of Micklehurst and Tintwistle townships in Cheshire, and the entire tract of Quickmere in Saddleworth township. W. R. Yorkshire; includes suburbs called Mossley-Bottom and Mossley-Brow; carries on industry in handloom woollen weaving, in several woollen factories, and in extensive cotton factories; is supplied with gas from Staleybridge gasworks, and with water from Ashton and Staleybridge waterworks; and has a railway station with telegraph, a post office of Mossley, under Manchester, a post office of Mossley-Bottom, under Manchester, a church, four dissenting chapels, a mechanics' institute, and parochial, national, British, and Roman Catholic schools. The church was built in 1755, and enlarged in 1788; and contains nearly 1,000 sittings. The Independent chapel stands at Mossley-Brow, and is a large and handsome stone structure. The Wesleyan chapel stands in Stamford-road, was built in 1867, is in the Lombardo-Venetian style, and contains 600 sittings. The mechanics' institute was built in 1858, and is a large and well-contrived stone structure. Fairs are held on the last Friday of Feb., 21 June, and the last Monday of Oct.; and wakes are held on the last Saturday of July. The chief residences in the vicinity are Apsley House, G. Andrew, Esq.; Whitehall, G. Mayall, Esq.; Highfield House, J. Mayall, Esq.; Breage Hill, S. Shaw, Esq.; Waterton, E. and J. Buckley, Esq.; Limefield, if,. Andrew, Esq.; and Valley Cottage, J. Kershaw, Esq. The assessment under the local act, in 1864, amounted to upwards of £26,000; and the population, in that year, was upwards of 13,000. The chapelry was made ecclesiastically parochial in 1865; and is bounded from N to SW by the County brook, and the river Tame. The living is a p. curacy in the diocese of Manchester. Value, £300. Patron, the Rector of Ashton.

Details about the census records, and indexes for Mossley.

The Register Office covering the Mossley area is Tameside.

You can see pictures of Mossley which are provided by:

"MOSSLEY, a hamlet in the district of Hartshead, and parish of Ashton-under-Lyne, hundred of Salford, county Lancaster, 2 miles N. of Staleybridge, and 9 E. of Manchester. It is a station on the Manchester and Leeds section of the London and North-Western railway. It is situated on the Huddersfield canal, near the river Tame, and under Hartshead Pike. The inhabitants are chiefly engaged in the cotton and woollen mills. Near Hartshead Pike is a lofty circular tower, surmounted by a spire. The living is a perpetual curacy in the diocese of Manchester, value £127, in the patronage of the Rector of Ashton. The church was built in 1755, and enlarged in 1786. There is a place of worship for New Connexion Methodists. Fairs are held on the 21st June, and the last Monday in October, for cattle."

The 1888 Boundary Commission maps which show how the various districts were combined into Lancashire. Prior to 1888 the Yorkshire part of Mossley was Roughtown and Quickedge. The Cheshire section included Heyheads, Hollins, Micklehurst and the Lancashire section which remained was St Georges, Brown Edge.

You can see the administrative areas in which Mossley has been placed at times in the past. Select one to see a link to a map of that particular area. 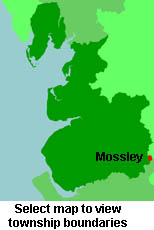 View maps of Mossley and places within its boundaries.