WOOLTON, a village and a chapelry in Much-Woolton township, Childwall parish, Lancashire. The vi1lage stands 2 miles NNE of Garston r. station, and 5 SE of Liverpool; was anciently called Wolveton; comprises several streets; and has a post-office under Liverpool, a police station, and a mechanics' institution. The chapelry was constituted in 1828. Pop. in 1861, 3,538. Houses, 687. The living is a rectory in the diocese of Chester. Value, £300. Patron, the Vicar of Childwall. The church was built in 1826. There are an Independent chapel of 1864, a Wesleyan chapel of 1834, a Unitarian chapel of about the end of the 16th century, a Roman Catholic chapel of 1861, national schools, a British school, and a Roman Catholic school.

Details about the census records, and indexes for Much Woolton.

The Register Offices covering the Much Woolton area are Knowsley and Liverpool.

"MUCH-WOOLTON, a chapelry in the parish of Childwall, hundred of West Derby, county Lancaster, 6½ miles S.E. of Liverpool, its post town. The village, which is extensive, contains numerous streets well lighted with gas. Much-Woolton, anciently called Wolveton, belonged to the Norris, Brettargh, Ireland, and Lathom families. Stone is quarried here to a great extent. The living is a perpetual curacy in the diocese of Chester, value £220, in the patronage of the Vicar of Childwall. The church, dedicated to St. Peter, is a modern stone structure. There are National schools for both sexes. Woolton Hall, the principal residence, is situated in a commanding position. The Marquis of Salisbury is lord of the manor. An annual wake is held at Woolton Green on Midsummer-day."

In 1835 Much Woolton was a township in the parish of Childwall.

You can see the administrative areas in which Much Woolton has been placed at times in the past. Select one to see a link to a map of that particular area. 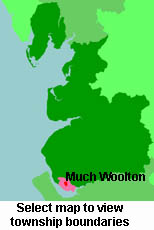 View maps of Much Woolton and places within its boundaries.