Details about the census records, and indexes for Musbury.

The Register Office covering the Musbury area is Hyndburn and Rossendale.

You can see pictures of Musbury which are provided by:

"MUSBURY, a township in the parish of Bury, higher division of the hundred of Blackburn, county Lancaster, 2½ miles S.W. of Haslingden. It is a station on the East Lancashire railway. A sub-post-office was established in 1856. The township is of small extent, but the village is considerable. Many of the inhabitants are employed in cotton spinning. The river Ogden passes through the neighbourhood. The soil is light and shallow upon a subsoil of rock. The living is a perpetual curacy in the diocese of Manchester, value £150, in the patronage of the crown and bishop alternately. The church, dedicated to St. Thomas, is a neat edifice, with a square spired tower containing eight bells. The church has a memorial window to the late William Turner, Esq., of Flaxmoss House, whose tomb is in the churchyard. The church was erected in the year 1851 at an expense of £3,000, chiefly defrayed by the late W. Turner, Esq., by whom also the site was presented. Flaxmoss and Flaxmoss House are the principal residences. There are several other residences."

In 1835 Musbury was a township in the parish of Bolton.

You can see the administrative areas in which Musbury has been placed at times in the past. Select one to see a link to a map of that particular area. 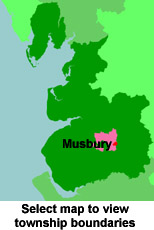 View maps of Musbury and places within its boundaries.