Newchurch in Rossendale is a very populous chapelry in the parish of Whalley, 20 miles north from Manchester 14 miles south from Colne. It is said to have obtained the name from the original church then called 'New Church'.

Newchurch comprises the districts or townships of Bacup, Deadwin Clough, Tunstead and Wolfenden. Much of Old Newchurch (Kirk) has disappeared and this is to be regretted. With its narrow streets, courts and seventeenth and eighteenth century buildings it represented a style of architecture which preceded the industrial revolution. The Mansion House, much of Old Street (Old Gate), the Oddfellows Hall, the house of J E Lord the hatter have all been demolished and an old inn the Black Dog was blown down by a gale in 1922. However St Nicholas' Church dating back to 1511 survived and also the Boars Head originally built in 1674.

From 'A Rossendale Anthology'

Details about the census records, and indexes for Newchurch in Rossendale.

The Register Office covering the Newchurch in Rossendale area is Hyndburn and Rossendale.

You can see pictures of Newchurch in Rossendale which are provided by:

NEWCHURCH-IN-ROSSENDALE, a village and a chapelry in Whalley parish, Lancashire. The village stands on an eminence, adjacent to the Manchester, Bury, and Bacup railway, 2½ miles W S W of Bacup; and has a station on the railway and a post-office under Manchester, both of the name of Newchurch, and a fair on the last Monday of June. The chapelry contains also the villages of Clough-Fold, Tunstead, Waterfoot, Booth-Fold, and Whitwell-Vale. Acres, 9,650. Rated property, £33,374. Pop., 24,413. The property is much subdivided. The manor belongs to the Duke of Buccleuch. Thistle-Mount, Springfield, Ashlands, Clough-fold, Edgeside, and Leabank, are chief residences. Coal, freestone, and slate abound; stone is quarried; and the cotton and woollen manufactures are largely carried on. The living is a rectory in the diocese of Manchester. Value, £500. Patron, the Vicar of Whalley. The church was rebuilt in 1826, on the site of a previous church of 1512; is in the Tudor style; consists of nave and aisles, with an embattled tower; has very old pews, and a carved Caen stone pulpit of 1854; and contains 1,200 sittings. The rectory house was built in 1852; and is a handsome edifice, in the Tudor style. Two other churches are in Tunstead and Waterfoot; chapels for Baptists, Wesleyans, Primitive Methodists, and Unitarians, national schools, and an endowed grammar-school, are in Newchurch; a Baptist chapel is in Clough-Fold; and a mechanics' institution is in Whitwell-Vale. The Wesleyan chapel was built in 1804, and contains nearly 500 sittings. The Unitarian chapel was rebuilt in 1865, at a cost of £2,200; and is in the pointed style. The grammar-school was built and endowed in 1711, by Mr. John Kershaw. The Baptist chapel in Clough-Fold dates from 1700; had Dr. Isaac Watts, at one time, as its minister; and was enlarged in 1838, and re-enlarged in 1853

"TUNSTEAD, an ecclesiastical district in the chapelry of Newchurch-in-Rossendale, parish of Whalley, county Lancaster, 3 miles S.E. of Haslingden, and 15 N.W. of Manchester, on the river Irwell, near the borders of Rossendale Forest."

"STACKSTEADS, a hamlet in the parish of Whalley, county Lancaster, 8 miles N. of Rochdale, and 11, mile from Bacup. It is a station on the West section of the Lancashire and Yorkshire railway."

"NEWCHURCH-IN-ROSSENDALE, a township and chapelry in the parish of Whalley, higher division of Blackburn hundred, county Lancaster, 20 miles N. of Manchester, its post town, 2½ miles S.W. of Bacup, and 3½ E. by S. of Haslingden. It is a station on the East Lancashire and Yorkshire railway. It is an improving place, situated on an eminence near the river Ribble, and on the old high road from Burnley to Manchester. The township is bounded at the nether extremity by the river Irwell, and includes the hamlets of Booth-Fold, Clough-Fold, and Water-Foot. The village is very extensive, and the inhabitants are principally employed in the cotton and woollen mills. There are also extensive collieries and quarries of freestone and slate. The living is a perpetual curacy in the diocese of Manchester, value £500, in the patronage of the Vicar of Whalley. The church, dedicated to St. Nicholas, has a square embattled tower containing a clock and six bells. It was rebuilt in 1826 on the site of an ancient chapel dedicated to the Holy Trinity. It contains a Caen stone pulpit, richly carved, which was added in 1854. In 1711 a grammar school was erected at the expense of Mr. John Kershaw, who bequeathed 60 acres of land and some house property for its support. There are National schools for both sexes, and Sunday-schools at Clough-Fold and Water-Foot. The Wesleyans, Primitive Methodists, and Baptists, have each a place of worship. Height Side House, Springfield, Spring Hill, and Thistlemount are the principal residences. The Duke of Buccleuch is lord of the manor."

"LUMB, a township and ecclesiastical district, in the parish of Whalley, upper division of the hundred of Blackburn, county palatine of Lancaster, 2 miles N. of Newchurch, its post town, and 6 S. of Burnley. The main road between the above towns passes through it. The hamlet of Water is in this township Cotton and woollen goods are manufactured here, and some of the people are employed in the quarries. The living is a perpetual curacy in the diocese of Manchester, value £150, in the patronage of the crown and bishop alternately. The church is a small stone edifice of Norman architecture, dedicated to St. Michael. There is a National school, and the Baptists have a place of worship and a school at Water."

"DEADWIN-CLOUGH, a village in the chapelry of Newchurch-in-Rossendale, in the county of Lancaster, 2½ miles N.E. of Haslingden."

In 1835 Newchurch in Rossendale was a chapelry and township in the parish of Whalley.

You can see the administrative areas in which Newchurch in Rossendale has been placed at times in the past. Select one to see a link to a map of that particular area. 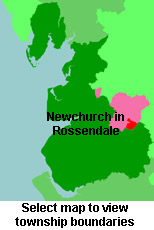 View maps of Newchurch in Rossendale and places within its boundaries.