NEWTON-IN-MACKERFIELD, a town, a parish, and a sub-district, in Warrington district, Lancashire. The town stands adjacent to the Liverpool and Manchester railway, in the neighbourhood of the junctions northward to Wigan and southward to Warrington, 1½ mile E N E of the magnificent railway viaduct over the Sankey valley, 5½ N by W of Warrington, and about midway between Liverpool and Manchester. It is some-times called Newton-le-Willows, or Newton-in-the-Willows; it is a borough by prescription; it sent two members to parliament from the time of Elizabeth till the passing of the reform act in 1832, and was then disfranchised; it was the scene of a defeat of the Highlanders in 1648, by a part of Cromwell's forces; it is near the spot where Huskisson was killed in 1830, at the opening of the Liverpool and Manchester railway ; it is a polling-place, and the place of election, for the S division of Lancashire; and it has a head post-office, designated Newton-le-Willows, a railway station with telegraph designated Newton, several inns, a constabulary station, two churches, an Independent chapel, a Roman Catholic chapel, a mechanics' institute, national schools, and charities £77. The parish church, or church of Emmanuel, is a recent stone edifice; and consists of nave, chancel, and porch, with tower and spire. St. Peter's church was recently rebuilt; and serves for a section which was made a separate charge in 1845, and had a pop. of 2,122 in 1861. The Roman Catholic chapel was built in 1865, after designs by Mr. G. Blount, at a cost of £4,000; and is in the decorated English style. The national schools were built in 1860, at a cost of more than £2,000; are in the early decorated English style; consist of centre and wings; and have a bell-turret. A weekly market was formerly held, but has fallen into disuse; fairs, chiefly forhorses, cattle, sheep, and pigs, are held on 17 May and 12 Aug; and there are an extensive foundry, a large sugar refinery, a paper mill, a printing establishment, and extensive railway waggon-works of the Northwestern company. The parish and the town are regarded as co-extensive; but the new large village of Earlestown, adjacent. to the Warrington junction, is included. Acres, 2,692. Real property, £17,061; of which £1,126 are in iron-works. Pop. in 1851, 3,719; in 1861, 5,909. Houses, 1,048. The increase of pop. arose mainly from the extension of trade. The manor belonged to Edward the Confessor; passed to the Langtons and others; and belongs now to W. J. Legh, Esq. The head living is a rectory, and that of St. Peter is a vicarage, in the diocese of Chester. Value of the rectory, £240; of the vicarage, £114. Patron of the former, the Earl of Derby; of the latter, W. J. Legh, Esq. The sub-district contains also the township of Haydock, and comprises 5,054 acres. Pop. in 1851, 5,713; in 1861, 9,524. Houses, 1,649.

Some records are held at Newton Library, but not much...they also have a large selections of newspapers there too. The rest of local records are split between St.Helens and Wigan Archives.

Details about the census records, and indexes for Newton in Makerfield.

The Register Offices covering the Newton in Makerfield area are St.Helens and Warrington.

You can see pictures of Newton in Makerfield which are provided by:

In 1835 Newton in Makerfield was a township in the parish of Winwick.

You can see the administrative areas in which Newton in Makerfield has been placed at times in the past. Select one to see a link to a map of that particular area. 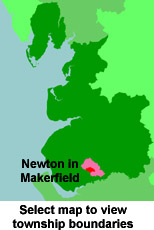 View maps of Newton in Makerfield and places within its boundaries.