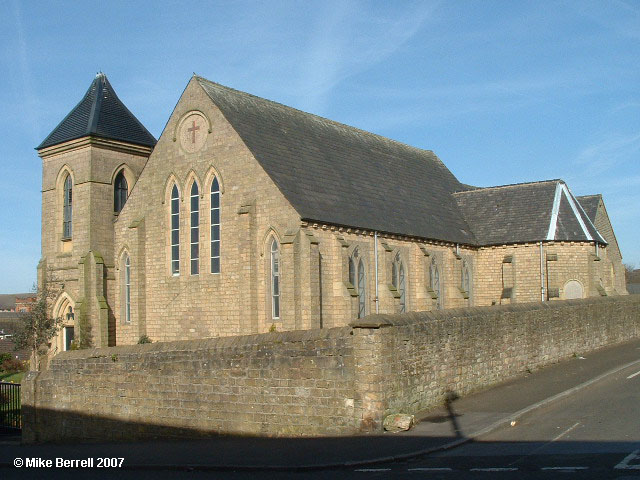 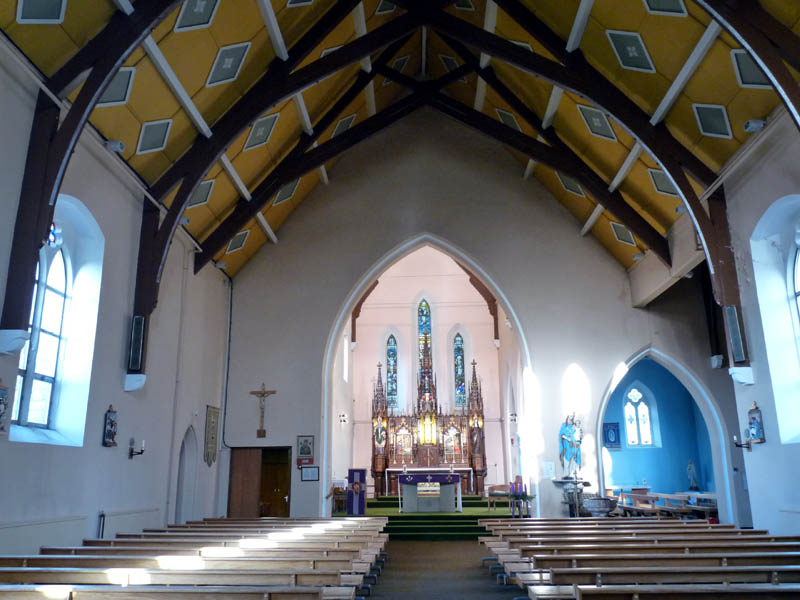 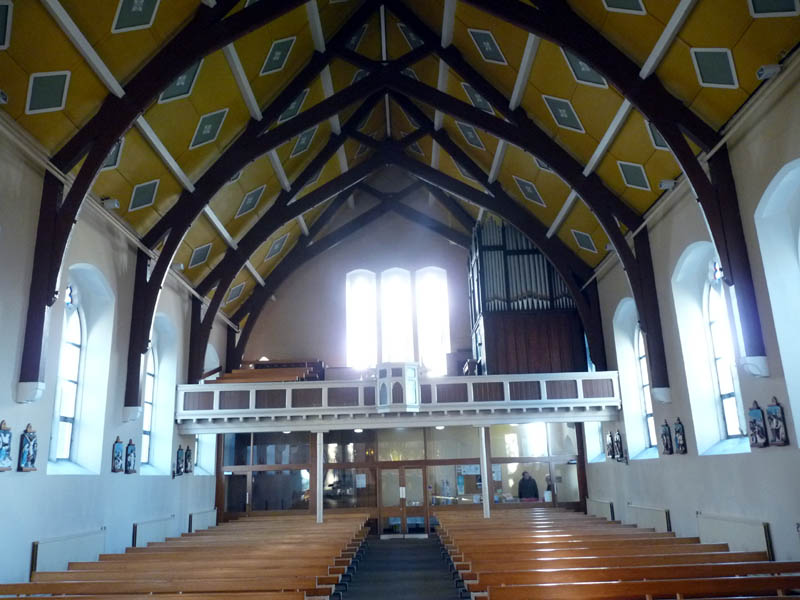 St Mary's is no longer an independant parish. It has been amalgamated (2005) with the Parish of Our Lady of Mt. Carmel and St Patrick, Oldham where the parish records are now kept. The churches retain their titles but the new parish is known as the parish of St Mary with St Patrick.

When the nineteenth century dawned, the few Catholics in the Oldham district were part of the vast and scattered flock that belonged to the Manchester clergy. When the new chapel of St. Augustine was built at Granby Row in 1826, all of the faithful of Oldham, Ashton-under-Lyne, and Dukinfield were included in the new missionary district.

In an attempt to cater for the Catholics who were so far from Manchester, the Rector of St. Augustine's, Father John Ashurst, hired an old building at Ashton for use as a chapel. This had been a Methodist chapel, and was situated at Harrop's Yard, off Cricket's Lane, and near the Old Cross. In 1824 the Rector of St. Augustine's died of typhus fever, contracted through his labours among the poor. The following year, 1825, the Rev. James Fisher began his work among the people of Oldham, Mossley, Dukinfield, Stalybridge, and Hyde. He established Dukinfield as his centre, but used to go to Oldham for Mass, which was said in a room over the "General Cornwallis" inn. The faithful climbed a flight of stone steps to the "upper room"-and how often since and in so many parts of the diocese have the people climbed stairs, Sunday after Sunday, to the upper room of a school-chapel!

In 1826 the chapel was removed across Henshaw Street to a garret over shops. This place was called "Pidgeon Cote," and here the Mass was said for three years.

In 1829 Fr. Fisher took out a lease of the Unitarian chapel in Lord Street. The premises would hold 300, being a neat building surrounded by a hawthorn hedge. When the first Mass was said here in August 1829, Oldham really became a separate mission, but it was only ten years later that it became properly established by the building of the first church of St. Mary's.

Fr. William Glassbrook had charge of the mission for a time in 1830, but ill-health compelled him to retire, and Fr. Fisher was obliged to return. Fr. Glassbrook died at Bolton in 1833.

A well-known Lancashire priest, the Rev. Robert Turpin, was in Oldham from 1833 to 1835 before going to build up the mission at Scorton. He was assisted by the Rev. H. Walmsley from Rochdale. The lease of the Lord St. chapel had now lapsed, and the faithful had to return to the public-house in Henshaw Street, now renamed the " Harp and Shamrock," but later still renamed the " Lamb and Lark." When Fr. Turpin was transferred to Bolton in 1835, the good people found that they were once more forced to turn to Dukinfield for the sacraments. Fr. Fisher died there in 1837 and was succeeded by his nephew, Fr. Adam George Fisher.

Fr. George Fisher, as he was known, was one of six brothers belonging to a Manchester family, all of whom became priests except the eldest. He was only twenty-seven when he arrived in Oldham, where he was without church, school or house. He resolved to go on a preaching mission in order to appeal for funds, and meanwhile neighbouring priests helped at Oldham.

Mr. Matthew Hadfield, the architect of Salford cathedral and many other churches, was asked by Fr. George Fisher to design a church and house for Oldham. This was done shortly after his appointment in 1837 and shows that he was determined to establish the mission on a proper footing. Two years later, in March 1839, the church of St. Mary's in Shaw Street was opened with solemn High Mass. The opening of St. Mary's caused great interest; crowds gathered early, and many folk congregated to see the stage-coach arrive from Manchester with its load of important people come for the ceremony.

In the Orthodox Journal dated September 15, 1838, a writer describes the effort to build the new chapel in Oldham:

The catholics of this town, who have for many years been struggling with obstacles, which are invariably the portion of the professors of the ancient faith, are at length engaged in the erection of a new Chapel, which it is hoped with the blessing of God will be opened for Divine Service about the end of this year. The congregation here amounts to upwards of 1000 and consists of poor Irish. Their means are extremely scanty and hitherto they have only been able to procure a wretched garret to assemble in, which at the utmost will not contain more than 200 persons, and it is a lamentable fact that, even in this liberal and enlightened age, a feeling of prejudice and religious bigotry should still be found rankling in the bosoms of those who on political subjects profess themselves reformers of a liberal stamp. . . . Although the Chapel is only half completed, the funds are nearly exhausted. An appeal to the Catholic public might very justly be made on its behalf. A temple designed for the Living God only half erected-a congregation extremely poor and unable to complete it-a pastor without a home, and wholly unprovided for-and a mission, though situated but a few miles from Manchester, of extensive labour and involved in numerous difficulties.

Fr. Fisher removed again to Dukinfield in 1840. He died at a great age, Rector of Hornby, made famous by the great Dr. Lingard. Fr. Edmund Hogan now took on the heavy task of building up the parish of St. Mary's. He first rented premises in Bow Street for schools, where in 1841 he housed 200 boys and 75 girls under, the care of ten teachers.

The graveyard around the church at St. Mary's was first opened in 1844 and remained open until 1857. During these years no less than 1,214 people were buried there. The growth of numbers in the parish is indicated by the rising figures each year for baptisms between 1841 and 1851.

Even if these figures represent a high birth-rate, they show that the numbers in the parish had far outgrown the small church at St. Mary's. Fr. Hogan obtained more roomy school premises in Whitehead Square. His work at St. Mary's lasted until December 29, 1853, when he was asked to start a mission at Ardwick. He died at St. Mary's, Levenshulme, in 1866 and was buried at Philips Park, - being in the 56th year of his age. Like so many priests of Salford he died comparatively young.

Fr. James Conway took charge of the Oldham mission in December, 1853. The times were hard. There was much anti-Catholic bitterness, the people were poor, and there was some political discontent among the exiles from Ireland.

With great zeal Fr. Conway set out to build a school. He asked the faithful to make the sacrifice of a week's wages for the cause, and he himself journeyed far and wide, and even into Ireland, in order to raise funds. A local family, Mr. and Mrs. Bullman, gave 500 guineas. In 1859 a commodious school was opened, and was reputed to be one of the very finest in Lancashire. Like several of the older, schools of the diocese it had a Catholic look, and might easily have passed for part of a convent or a monastery.

In May 1861, during the Whit Friday procession, the Catholics by accident crossed the path of the Church School procession. This caused confusion and disorder, all the more so because the Catholics were blamed for an act of aggression. The unseemly brawling that followed was only dispelled by the police using batons, and meanwhile women and children had been hurt and become hysterical. The stage was now set for worse to come.

The Whit Friday mishap was evidently much resented. Groups of young men began to assemble regularly in "Tommyfield" to plan resistance to the Irish "papists' aggression". The attack came on the evening of Thursday, June 6, 1861. A mob of several thousands went to the church in Shaw Street and smashed everything they could without actually entering the church. The following evening the mob were out again, and it is recorded that as many as 15,000 had gathered to watch the sport or share in it. This time the police were on duty and prevented more damage. However, some of the mob turned their attention to Fr. Conway's chapel-of-ease-St. Patrick's, Union Street West.

These shocking incidents seem to have broken the spirit of Fr. Conway and he resigned. The dignified apology and farewell that he wrote to the people of Oldham and published in the Oldham Standard would have been reprinted here did space allow. He expresses pleasure that the youths who were tried for their part in the riots were not sent to prison, and he affirms that the damage done was not very great. After some time at St. Edmund's, Bolton, and St. Patrick's, Manchester, Fr. Conway went to the missions in Australia, where he died at the early age of 40.

Fr. Thomas Wrennall arrived as Rector. He was in time for the hard years and the misery of the Cotton Famine, when soup kitchens had to be opened to prevent people dying of starvation. There was one more attempt (Whit Friday, 1866) to oppose the Catholic procession.

Worn out by heavy labour, and suffering from weak health Fr. Wrennall resigned his charge. He was succeeded by a most zealous and active priest, Fr. Charles Grymonprez from Bruges diocese. He arrived from Mossley where he had built a church. He found that his new church was in danger of collapse because a new roof was forcing outwards the side walls. The church was then closed and Mass said at the Temperance Hall, Horsedge Street.

Typical of the bigotry of the time was an attempt to stop the Town Council from paving Shaw Street, where the Catholics had often to flounder through mud and pools of water to get to church. Fortunately the attempt was defeated. Shaw Street was paved and drained, and the restored church was opened at the end of 1870.

Fr. Grymonprez, although a foreigner, took an active part in public life and was on the School Board. His idea of how a Catholic should vote is interesting: "He described the Church of England and the Conservative Party on the one hand, and the Dissenters and Liberals on the other, as being so nearly balanced that the ruling power, both nationally and locally, was in the hands of the Catholic body. . . . He explained that in supporting either of the Parties the Catholics should be guided solely by the consideration of how best they could advance their own church."

On February 7, 1874, Bishop Vaughan solemnly opened the renovated church and preached both morning and evening. In 1876 a new pulpit was inaugurated by an Oldham man from Omagh, U.S.A., Fr. John Curtis.

Until his resignation in 1897 Fr. Grymonprez worked without ceasing and it was largely through his efforts that five new missions grew from St. Mary's, namely Lees, Shaw, Hollinwood, Green-acres, and Royton, a remarkable achievement.

For six years after Fr. Grymonprez the parish was in the care of Fr. J. B. Cooke, afterwards a prelate and Rector of St Mary's in Burnley. Fr. Michael Buckley did good work here before going to Whitworth. Fr. Godric Keane was here before becoming an army chaplain, and Fr. Andrew Ivory was here more than twenty years.