OPENSHAW, a township and a chapelry in Manchester parish, Lancashire. The township lies on the Manchester and Stockport canal, and on the Manchester, Sheffield, and Lincolnshire railway, 2½ miles E by S of Manchester; contains a large village of its own name; and has a station on the railway, and a post-office under Ashton-under-Lyne. Acres, 571. Real property, £2,866. Pop. in 1851, 3,759; in 1861, 8,623. Houses, 1,688. The increase of pop. arose from the establishment of ironworks and chemical works. The manor belongs to G. Legh, Esq. There are a large cotton mill, weaving-sheds, extensive dye-works, a very extensive manufactory of railway carriages, and a depot for repairs of locomotive engines. The chapelry was constituted in 1840; was, till 1861 or later, conterminate with the township; and was subsequently curtailed, so as to have a pop. of only 2,777. The living is a rectory in the diocese of Manchester. Value, £300. Patrons, Trustees. The church was built in 1839, at a cost of £4,500; is in the early English style; consists of nave, aisles, and chancel, with tower and spire; and contains 800 sittings. A Wesleyan chapel was built in 1864, at a cost of £2,600; is in the Anglo-Italian style; and contains 600 sittings. There are also chapels for New Connexion Methodists. United Free Methodists, and Roman Catholics; and schools, called the Cobden Memorial schools, were built in connexion with the United Free Methodist chapel in 1866, at a cost of about £800. There is likewise a mixednational school, with £25 a year from endowment.

Details about the census records, and indexes for Openshaw.

The Register Office covering the Openshaw area is Manchester.

You can see pictures of Openshaw which are provided by:

"OPENSHAW, (or Andenshaw) a township in the parish of Manchester, hundred of Salford, county Lancaster, 3½ miles S.E. of Manchester, its post town. It is a station on the Sheffield and Lincolnshire railway. It is situated on the Manchester and Stockport canal, and on the road to Ashton-under-Lyne. There are extensive cotton mills and dye works, also a large railway carriage manufactory, which together afford employment to a large number of the inhabitants. The soil is of a clayey nature, alternating with sand, and resting on a subsoil of sandstone. The living is a perpetual curacy in the diocese of Manchester. The church, dedicated to St. Barnabas, has a square tower surmounted by aspire. The church was erected in 1838 at an outlay of £4,500. There are commodious National schools for both sexes, endowed with £500, and in which a Sunday-school is also held. The Wesleyans and Roman Catholics have each a place of worship. George C. Legh, Esq., is lord of the manor.

In 1835 Openshaw was a township in the parish of Manchester.

You can see the administrative areas in which Openshaw has been placed at times in the past. Select one to see a link to a map of that particular area. 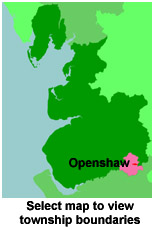 View maps of Openshaw and places within its boundaries.