"ORMSKIRK, a town, a township, a parish, a sub-district, and a district, in Lancashire. The town stands on the East Lancashire railway, at the junction of the branch from St. Helens, 2½ miles S E of the Leeds and Liverpool canal, and 12 N by E of Liverpool. The manor belonged, till the Reformation, to Burscough priory; and belongs now to the Earl of Derby. The town is well-built; contains four chief streets, going rectangularly from a central market-place; is governedby a local board of health, and well supplied with gas and water; is a seat of petty sessions and county-courts, and a polling-place; publishes two weekly newspapers; and has a head post-office, a railway station with telegraph, a banking office, two chief inns, a town hall and corn-market, a sessions-house and magistrates' rooms, a news-room and library, a church, three dis-senting chapels, a free grammar-school, a national school, a dispensary, a workhouse, and charities £354. The dissenting chapels are Independent, Wesleyan, and Unitarian. The free grammar-school was founded in 1614, under the will of Henry Ascroft; is a Tudor structure, in Ruff-lane; and has an endowed income of £139. The national school was erected by voluntary contributions; is a stone building in the Tudor style, in Derby-street; possesses capacity forupwards of 800 scholars; and the Sunday school has an endowed income of £28. The dispensary is a small but ornamental building, in the Doric style, in Burscough-street. The workhouse stands in Wigan-road; was built at a cost of about £4,000; and, at the census of 1861, had 76 inmates. A weekly market is held on Thursday; cattle fairs are held on Whit-Monday, Whit-Tuesday, and 10 Sept.; rope-making and hand-loom silk-weavingare carried on; and there are several breweries, and an iron-foundry. Acres of the town, 572. Real property, £13, 597; of which £323 are in gas-works. Pop. in 1851, 6,183; in 1861, 6,426. Houses, 1,193."    more ...

Details about the census records, and indexes for Ormskirk.

The Register Office covering the Ormskirk area is West Lancashire

You can see pictures of Ormskirk which are provided by:

In 1835 the parish of Ormskirk contained the townships of Ormskirk, Skelmersdale, Scarisbrick, Burscough, Lathom, Bickerstaffe and Simonswood.

You can see the administrative areas in which Ormskirk has been placed at times in the past. Select one to see a link to a map of that particular area. 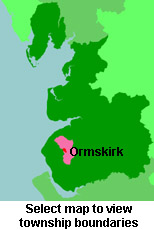 View maps of Ormskirk and places within its boundaries.

The Workhouse site has an interesting description of Ormskirk workhouse.