OSWALDTWISTLE, a town, a township, a chapelry, and a sub-district, in Whalley parish and Blackburn district, Lancashire. The town stands on the Leeds and Liverpool canal, and on the East Lancashire section of the Yorkshire and Lancashire railway, contiguous to Church village and r. station, 3 miles E S E of Blackburn; is built chiefly of stone; is supplied with water, from works constructed in 1865; carries on industry in extensive cotton-factories, print-works, and potteries; conducts traffic also in connexion with neighbouring collieries and quarries; and has a post-office under Accrington, a local board of health, a church, two large Church schools used also as chapels of ease, five dissenting chapels, three national schools, two dissenting schools, a temperance library and reading-room, and charities £50. The church was built in 1837; consists of nave and chancel, with a tower; and contains about 800 sittings. The dissenting chapels are Independent, Baptist, Wesleyan, Primitive Methodist, and United Free Methodist. The township contains also the hamlets of Bellthorn, Stanhill, and Knuzden-Brook. Acres, 4,770. Real property, £27,027; of which £4,237 are in mines, and £317 in quarries. Pop. in 1851, 7,654; in 1861, 7,701. Houses, 1,396. The manor belongs to Sir Robert Peel, Bart. Peelfold, where the first Sir Robert Peel spent his early years, is in Knuzden-Brook. Bellthorn House, Stanhill House, Knuzden Hall, and Mount Pleasant are chief re-sidences. Two cotton-factories are at Knuzden-Brook; an Independent chapel is in Bellthorn; and national schools are in Bellthorn and Knuzden-Brook. The chapelry is less extensive than the township, and was constituted in 1840. Pop. in 1861, 6,183. Houses, 1,100. The living is a p. curacy in the diocese of Manchester. Value, £300.* Patrons, Five Trustees. The sub-district comprises the township of Oswaldtwistle and Church. Acres, 5,390. Pop. in 1851, 9,689; in 1861, 12,454. Houses, 2,269.

The monumental incriptions for the Baptist Chapel, New Lane and Immanuel Church have been published by the LFH&HS.

Details about the census records, and indexes for Oswaldtwistle.

The Register Office covering the Oswaldtwistle area is Hyndburn and Rossendale.

You can see pictures of Oswaldtwistle which are provided by:

"OSWALDTWISTLE, a township in the parish of Whalley, lower division of the hundred of Blackburn, county Lancaster, 1 mile from Accrington, its post town, 3½ miles S.E. of Blackburn, and near Church Town station on the East Lancashire railway. The village, which is of large extent, is situated on the Leeds and Liverpool canal. It is lighted with gas, and well supplied with water. The houses are chiefly of stone. A large portion of the inhabitants are employed in the cotton mills and print works. There are also extensive collieries, potteries, and stone quarries. The living is a perpetual curacy in the diocese of Manchester, value £300. The church, dedicated to Emanuel, has a tower containing one bell. The parochial charities produce about £5 per annum. There are National schools for both sexes, also Sunday-schools. The Independents, Wesleyans, Wesleyan Association, Baptists, and Primitive Methodists, have each a place of worship, and the three former have a Sunday-school in connection with their chapels. Sir R. Peel, Bart., is lord of the manor."

Fiona Hall has made available Oswaltwistle census transcripts for surname HAWORTH 1841-1901 and WALSH, SUDALL, TATTERSALL for some of the other years.

In 1835 Oswaldtwistle was a chapelry and township in the parish of Whalley.

You can see the administrative areas in which Oswaldtwistle has been placed at times in the past. Select one to see a link to a map of that particular area. 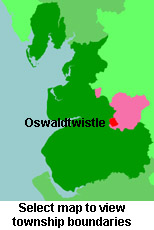 View maps of Oswaldtwistle and places within its boundaries.