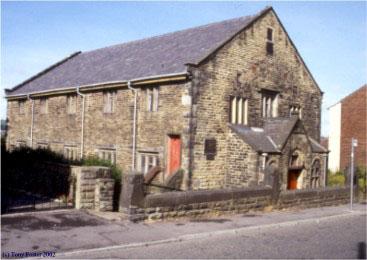 J G Shaw, History of Darwen and its People (1889 republished on CD-ROM by Archive CD Books).

A large graveyard is attached to the church. The MI's have been transcribed - copy in Darwen Library.

In 1723 an influential section of the congregation seceded from Lower Chapel and built a place called Yates's Chapel. The two congregations were reunited in the early 1750's. During 1852 the foundations became unsafe and a major part of the congregation removed to Duckworth Street where they built a new church in 1853. A small section remained and renovated Lower Chapel. The church bears four date stones - 1719; 1753; 1853; 1873; and 1937. After almost 290 years of religious use Lower Chapel finally closed in 2003.

Lower Chapel is now run and managed by the Lighthouse Darwen, a not for profit company limited by guarantee. Amongst the user of the Chapel are the Local History group, the Archaeology group, Morris dancers, dance and jazz classes, a worship fellowship. Repairs and refurbishments are underway, with part of the grave yard being cleared.

Original Registers: 1751-1837 located in The National Archive. The post 1837 registers are being deposited in the Lancashire Record Office.