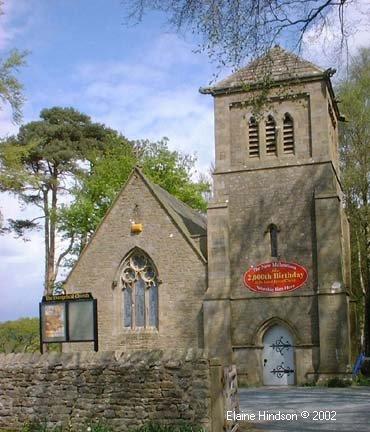 Capernwray Church was built between 1835 & 1840 by order of Mr & Mrs George Henry Powys Marton, Lord Lieutenant of the County of Lancashire who lived at Capernwray Hall and owned Borwick Hall, Borwick Station and about 27 surrounding farms. The family were wealthy landowners, they moved in high society, political circles and owned and raced horses at Derby.

The church was built for use by Mr & Mrs Marton, their family and the families of those who were tenants or worked on the farms they owned.

The Marton family were friendly with the vicar from Gressingham church who led their services, the opening service being held on 5th October 1840.

The date stone on the east face of the tower shows 1857 with the initials L.S.M ., Lady Sarah Marton, the tower was added later to the structure to give it style and a bell tower, the original double entrance doors facing the Hall were where the tower base now is , part of the upper arch is still visible

The church was built by local craftsmen using stone from the old quarry at Starricks Farm.

The faces of the couple on the west window stone surround may well resemble the owners, Mr & Mrs Marton.

The gargoyles on the tower and vestry gutters, to ward off evil spirits, would no doubt frighten the children to keep them quiet when they went to church.

The Marton coat of arms is shown on the stain glass east window with their family motto For God & My Native Land.

The stain glass west window was donated by Lady Sarah Marton in memory of her father the right honourable Lord Chief Justice Dallas and Justina Davidson of Tulloch Castle, Ireland.

The flagpole on the west wall would be to fly the various flags appropriate St Georges Day, The Union Jack etc

The church was heated by an open fire in the tower base, where the boiler now stands and the chimney goes all the way up to the top of the tower.

During World War II the resident pupils of Ripley St Thomas School Hospital trust, Lancaster were evacuated to stay at Capernwray Hall and used the church for Sunday worship.

The original bell, which called worshippers to church, is still resting in its cradle at the top of the bell tower. It was last rung at a wedding in the 1970s.

On 11th September 1946 Major & Mrs Thomas bought Capernwray Hall, the parkland and the church. The church is still owned by the Capernwray Hall Torchbearer fellowship.

When students and young people began to come to Capernwray Hall the church was used by its residents and friends for Sunday services. The chancel area of the church was sectioned off with a windowed partition depicting the torchbearer emblem to form a rear vestry room and a pulpit area as it now is.

By now there were so many summer holiday visitors staying at the Hall that the church was not large enough. Summer Sunday services were held in the hall and the church was converted in 1962 for summer dormitory use to accommodate and provide sleeping quarters for all the visitors. This required the fitting of a false ceiling / upper floor, dormer windows and a tower upper floor. The vestry area was used at one time as a recording studio. The church was still used during autumn and winter for Sunday services by Capernwray Hall personnel.

The church had been unused for some years when the early members of the Evangelical fellowship, who had formerly worshipped at Arkholme chapel were looking for a new church. They were offered the use of this church by Mrs Thomas in the early 1970s.