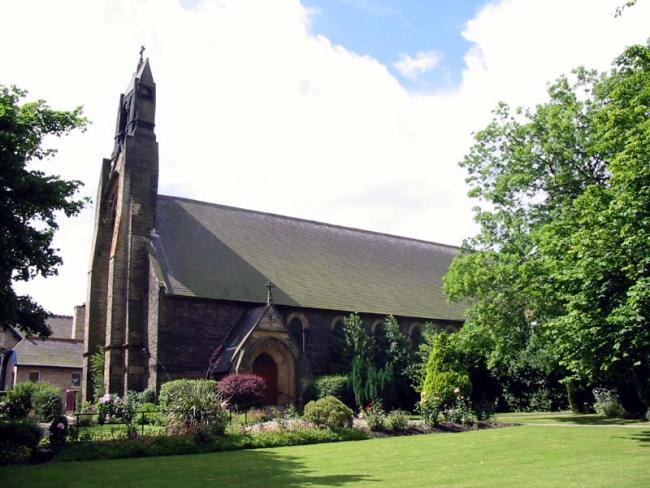 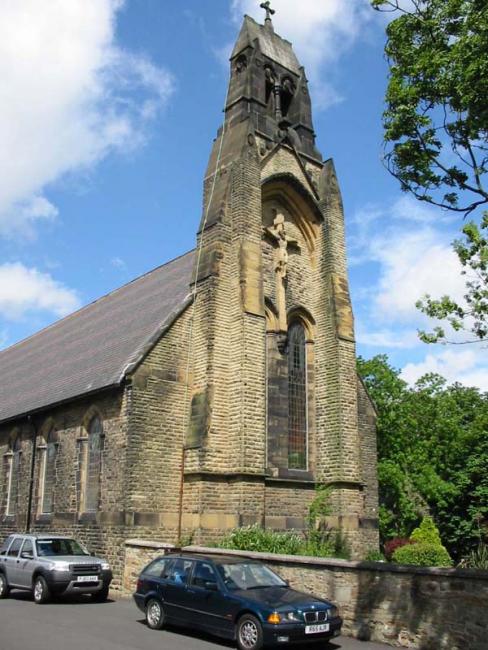 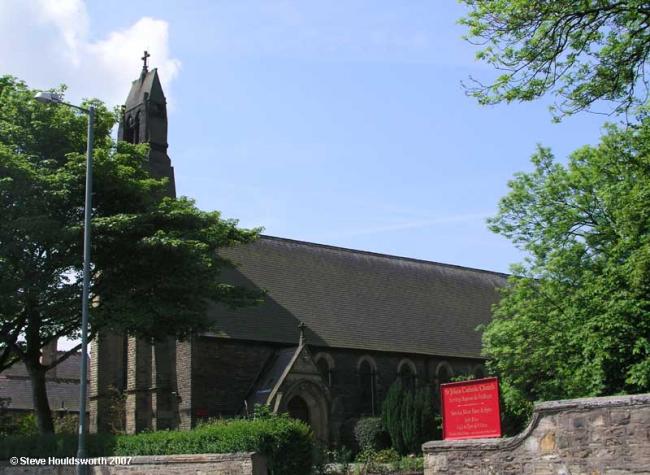 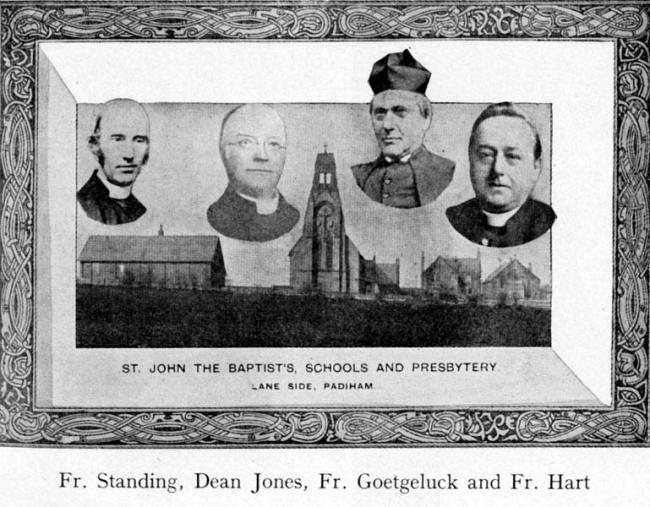 For several years after its foundation, this mission was served from Burnley. It began as a school chapel, and Fr. Standing was here for a time. Fr. McDermott Roe built the presbytery. From 1873 to 1892 the mission had the good fortune to be ruled by Dean Henry Jones, who came from Colne. A new church was opened in 1881.

After the death of Dean Jones (see notes below), a man of apostolic zeal, the mission was in the care of Fr. E. Goetgeluck until 1901. Fr. Francis Hart then served here until his death in 1915. Fr. Hart had previously been Vice-Rector of St. Bede's College and had helped to build the College chapel. In more recent years the parish has been under the care of Fr. A. Vantomme, Fr. Hubert Baron, and Fr. William Ramsdale.

The first priest to be permanently appointed as resident missionary Rector was Father McDermott Roe. From all accounts he was a gentle soul and suffered much from the hostile bigotry obtaining in those days. He took up residence in a house in the street we always knew as " Campbell's Row", Padiham Green.

So narrow-minded was the bigotry and so hostile was it, that he had to keep his blinds drawn, for they even invaded his front garden, pressing their faces against his window-frames to observe what "devilish Popish tricks" he might be up to. Also he was unable to leave his house with safety on foot, as stones were hurled at him, and he had to go by cab to his destination. Naturally he had a nervous breakdown and was removed to more congenial surroundings. He was succeeded by Fr. Johnson, who used other methods, whereby the stupidity ceased.

Fr. Johnson was by all accounts an individual who would stand no nonsense and hustled his own backsliders in a truly firm manner. The Branch Railway line running through Padiham was at this time in course of erection and, as was usual, Irish labour was brought in. To the everlasting disgrace of those responsible, miserable hutments were run up, with earthen floors, and but an aperture rather than windows here and there, plus a smoky stove. It was in the days of cheap drink, and these poor souls after twelve hours or more of strenuous labour resorted to the drink "palaces". Drunken scenes were a result, and someone who mentioned this to Fr. Johnson received the following reply: "They earn their money like horses and spend it like asses."

Father Henry Jones succeeded Fr. Johnson. The church in those days was the little building adjoining the cemetery wall. The school was over a smithyshop by the Goyt, to which access was had by a wooden staircase. A new school-chapel was built and then a new school in 1889. A priest who was a qualified architect drew up the plans. Then Fr. Jones acted as clerk of the works and, aided by a small group of decent, hard-working parishioners, built the school for between £600 and £700.

Fr. Jones died at the age of 69 on November 21, 1891, from a seizure and was buried at Rose Grove. I was baptised by him. He was a very dear and holy priest, and was held in great esteem by the people of the town, both Catholic and non-Catholic, so much so that at his funeral as the cortege passed, the shopkeepers put up their shutters and stood respectfully on the sidewalk.

At one time he must have been serving in South Wales, as I was told he built a church in the Clifton district. He also helped to start the mission in Colne. His housekeeper, "Helen", once told my mother that there were times at Colne when they scarcely had a cup of tea in the house.

There are many delicate points I have experienced, as I frequently served his Mass for some years. To hear his preparation for Mass whilst already vested was touching indeed, and again during the Mass his prayers (audible to the acolyte) were such as to cause us lads to marvel. All of us looked upon him as a holy man in the fullest sense of the word.

There were some who thought he was too old. In those days £100 was a large sum to gather, yet when he died there was only a debt of £600 left on the parish.

To go to Confession to Fr. Jones was an ordeal. He would be praying out loud and calling out "Begone! Begone! Begone!" Then after a respite he would turn again to the penitent. It was generally believed he was tormented by evil spirits, often and often.

Whilst preparing for Mass, he would be praying at the vestment chest before a crucifix saying "That I may be worthy" or similar ejaculations over and over again. Then suddenly he would seize his biretta and rush along into church. Again, during the Mass, and from the Offertory on towards the Elevation he would be asking God that he might be worthy.

On one occasion as we entered the church, which was empty, we were greeted by a peal of horrible laughter, which rang through the church. On entering the sanctuary, he turned to me and said "Did you hear anything, Maurice? " (as he always addressed me). I replied "Yes". He asked "What was it?" I told him. "Is there anyone in the church?" he asked. I replied "No". He then said "Go down the church and see". I did so, looking under the seats and under the old choir gallery, the porch, which was empty and the doors locked and bolted, and also up the choir gallery. When I returned and told him, he immediately commenced the Mass and never referred to it again. Needless to say my heart was jumpy whilst I searched, as I was only about 11 or 12 years of age.

Another evening we were sitting in the kitchen when there was a bump at the door. Mother immediately opened the door leading to the hall and met Fr. Jones, who appeared to be labouring from some extraordinary exertion and perspiring. He entered the kitchen and sat down, and did not appear to be in any hurry to leave. He eventually rose and proceeded towards the door, Mother offering to send one of the boys with him. As he stepped into the open, he looked both ways, then without another word hurried away and was soon out of sight. Mother, often referring to it, said she was sure some evil spirit had been buffeting him.

What I have set down here is correct regarding the time I knew Fr. Jones in every detail, and although it may seem far-fetched, it is true.

Fr. Henry Jones was a Lancashire man in spite of his Welsh name, having been born at Warrington of a family that belonged for many years to Pendleton. He was a student and professor at Lisbon. While at Lisbon he had a serious illness and his life was despaired of, but he recovered.

1871. Fr. Jones came to Colne. He had often heard of the state of Colne and was often troubled what to do to help it, and had said to many and at last to the Bishop "What about Colne?" The Bishop told him that he might go there if he would. He had laboured hard for sixteen years to build up the mission at Aspull, but this he cheerfully left to work up Colne. He took up missionary services in the upper room in the Angel Inn yard. There was still a hostile and scoffing spirit in some districts people passed through on the way to chapel. The zeal of Fr. Jones was greater than his strength for the task and he was sent to Padiham. I well remember him coming to our house. He was so kind and good, and had a lovely collie dog, white and tan, that we all loved, called Prince. I am sure he had a very poor time at Colne but he did very good work. Before he came my father and a friend used to gather all the boys and girls they could and teach them Catechism on a Sunday afternoon. May God be good to all the splendid priests we had and may their souls mount high in Heaven!