PARR, a village, a township, and a chapelry, in Prescot parish, Lancashire. The village stands near the Sankey canal, the St. Helens railway, and the Liverpooland Manchester railway, 1½ mile E S E of St. Helens r.station; and has a post-office under St. Helens. The township contains also the hamlets of Parr-Flat, Ashton-Green, and Blackbrook. Acres, 1,601. Real property, £35,208; of which £20,292 are in mines, £29 in the canal, and £68 in gas-works . Pop. in 1851, 4,875; in 1861, 8,253. Houses, 1,419. The manor belonged anciently to the family of Parr; one of whom was Sir Thomas Parr. There are extensive collieries, large alkali works, and copper works. The chapelry excludes part of the township, and was constituted in 1844. Pop.in 1861, 4,712. Houses, 824. The living is a p. curacy in the diocese of Chester. Value, £300.* Patron, the Incumbent of St. Helens. The church was built in 1865, in room of a previous one destroyed by fire, but on a different-site. There are a dissenting chapel, two national schools, and a Roman Catholic school.

Details about the census records, and indexes for Parr.

The Register Office covering the Parr area is St Helens.

You can see pictures of Parr which are provided by:

"PARR, a township in the parish of Prescot, hundred of West Derby, county Lancaster, 1 mile S.E. of St. Helen's, its post town, 3 S.W. of Newton-in-Mackerfield, and 5 E. of Prescot. The township, which is situated near the Runcorn railway and Sankey canal, comprises the hamlets of Parr Stocks, Parr Flatts, Ashton Green and Blackbrook. There are several collieries, copper works, and extensive alkali works, which give employment to a large number of the inhabitants. The colliers employed by one proprietor collected among themselves no less a sum than £50 towards the erection of the church. The living is a perpetual curacy in the diocese of Chester, value £150, in the patronage of the Incumbent of St. Helen's. The church, dedicated to St. Peter, is modern. There are National and infant schools, also a school for the Roman Catholics, and a Sunday-school for the Wesleyans."

"BLACKBROOK, a hamlet in the township of Parr, and parish of Prescot, hundred of West Derby, in the county palatine of Lancaster, not far from Prescot."

"ASHTON GREEN, a hamlet in the township of Parr, and parish of Prescot, hundred of Derby, in the county palatine of Lancaster, 2 miles from St. Helens.

In 1835 Parr was a township in the parish of Prescot.

You can see the administrative areas in which Parr has been placed at times in the past. Select one to see a link to a map of that particular area. 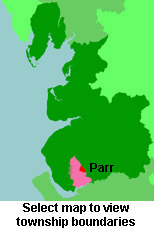 View maps of Parr and places within its boundaries.