This is the Pendleton in Salford. There is another Pendleton near Clitheroe.

Details about the census records, and indexes for Pendleton.

The Register Office covering the Pendleton area is Salford.

You can see pictures of Pendleton which are provided by:

"PENDLETON, a township and chapelry in the parish of Eccles, hundred of Salford, county Lancaster, 3 miles from Manchester, its post town, and 7½ N. of Bolton. It is a station on the western section of the Lancashire and Yorkshire railway. The village, which is considerable, may be considered a suburb of Manchester. It is situated on the main road from Manchester to Bolton. A large portion of the inhabitants are employed in the collieries and cotton mills, and some in the dyeing, printing, and bleaching establishments. Adjacent to the village are many villas. The living is a perpetual curacy in the diocese of Manchester, value £344, in the patronage of the Vicar of Eccles. The church, erected in 1831, is dedicated to St. John. There is also a chapel-of-ease, dedicated to St. Thomas. The charities produce £4 per annum. The Independents, Wesleyans, and New Connexion Methodists have places of worship."

"PADDINGTON, a village in the parish and city of Manchester, hundred of Salford, county Lancaster, about 1 mile from Manchester, of which it is a suburb. The living is a perpetual curacy in the diocese of Manchester, value £300, in the patronage of the crown and bishop alternately."

In 1835 Pendleton was a township in the parish of Eccles.

You can see the administrative areas in which Pendleton has been placed at times in the past. Select one to see a link to a map of that particular area. 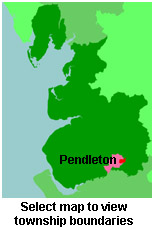 View maps of Pendleton and places within its boundaries.