Details about the census records, and indexes for Pennington in Furness.

The Register Office covering the Pennington in Furness area is Ulverston.

You can see pictures of Pennington in Furness which are provided by:

"PENNINGTON, a parish in the hundred of Lonsdale North of the Sands, county Lancaster, 1½ mile W. of Ulveston, its post town, and 3 miles N.E. of Dalton. The village, which is of small extent, is chiefly agricultural. Some of the inhabitants are employed in the iron-ore mines at Lindale Moor and Carkettle. The soil is of a sandy and marly nature, with a gravelly subsoil. Above a third of the parish was formerly in common, but was enclosed under an Act obtained in 1821. Blue slate is abundant. The impropriation belongs to the Arabic Professorship in the University of Oxford. The living is a vicarage in the diocese of Carlisle, value £204, in the patronage of the Duchy of Lancaster. The church, dedicated to St. Michael, has a tower containing two bells. It was rebuilt in 1825 at an outlay of £550. The register dates from 1623. The parochial charities produce about £3 per annum, which goes to Fell's school. There is a parochial school for both sexes. Lord Muncaster is lord of the manor."

You can see the administrative areas in which Pennington in Furness has been placed at times in the past. Select one to see a link to a map of that particular area. 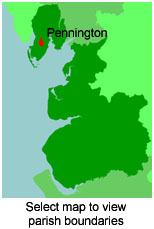 View maps of Pennington and places within its boundaries.