PENWORTHAM, a village, a township, and a parish, in Preston district, Lancashire. The village stands on the river Ribble, near the Northwestern railway, 1½ mile S W of Preston; and has a post-office under Preston. The township contains also the village of Middleforth-Green, and the hamlet of Charnock-Moss; and comprises 2,277 acres. Real property, £7,221; of which £30 are in fisheries. Pop. in 1851, 1,487; in 1861, 1,506. Houses, 271. P. Priory, P. Hall, P. House, the Oaks, Hurst Grange, White Friars, and Swallow House are chief residences. An ancient castle stood here, to guard the navigation of the Ribble; but was long ago erased. A Benedictine priory, a cell to Evesham abbey, was founded here, in the time of the Conqueror, by Warine Bussel; was given, at the dissolution, to the Fleetwoods; and has left no remains. The parish contains also the townships of Howick, Hutton, Longton, and Farington. Acres, 11,317; of which 1,450 are water. Real property, £26,169. Pop. in 1851, 5,722; in 1861, 5,488. Houses, 996. The property is subdivided. Bricks and tiles are made in Howick; and brewing and malting are carried on in Longton. The living is a p. curacy in the diocese of Manchester. Value, £125.* Patron, L. Rawstorne, Esq. The church is of the 14th century; was partly rebuilt, partly enlarged, in 1856; consists of nave, aisles, and chancel, with porch and low tower; and contains handsome monuments of the Fleetwoods and the Rawstornes. The p. curacies of Longton and Farington are separate benefices. A chapel of ease, a Wesleyan chapel, a workhouse for female children, an endowed grammar school, and charities £70 are in P. township; and dis-senting chapels and public schools are in the other townships.

Details about the census records, and indexes for Penwortham.

You can see pictures of Penwortham which are provided by:

In 1835 the parish of Penwortham contained the townships of Penwortham, Howick, Hutton, Longton, and Farington.

You can see the administrative areas in which Penwortham has been placed at times in the past. Select one to see a link to a map of that particular area. 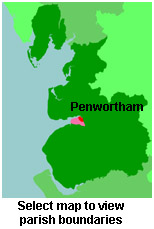 View maps of Penwortham and places within its boundaries.