PILKINGTON, a township in Prestwich parish, and a sub-district in Bury district, Lancashire. The town-ship lies adjacent to the river Irwell and the East Lancashire railway, 5¼ miles N N W of Manchester; is cut into the three sections of Outwood, Unsworth, and Whitefieldor Stand; contains the hamlets of Ringley, Cinderhill, Blackford, and Hollins; is supplied with water from the Bury waterworks, and with gas from the Radcliffe and Pilkington gas-works; has a post-office of Whitefield, under Manchester; carries on industry in coal mines, several large cotton factories, bleach-works, and dye-works; and contains the churches of Ringley, Unsworth, and Stand, seven dis-senting chapels, two endowed grammar schools, and two national schools. Acres, 5,378. Real property, £41,765; of which £2,837 are in mines, and £28 in iron-works. Pop. in 1851, 12,863; in 1861, 12,303. Houses, 2,506. The manor belongs to the Earl of Derby. Outwood Park and Outwood Lodge are chief residences. The sub-district is nearly identical with the township, differing only in excluding two small uninhabited portions.

Details about the census records, and indexes for Pilkington.

The Register Office covering the Pilkington area is Bury.

You can see pictures of Pilkington which are provided by:

"RINGLEY, a chapelry in the parish of Prestwich, hundred of Salford, county Lancaster, 7 miles N.W. of Manchester, on the East Lancashire railway. The living is a perpetual curacy in the diocese of Manchester, value £250, in the patronage of the Rectors of Prestwich, Bury, and Middleton. The church is dedicated to the Holy Trinity. There is a school founded by Nathan Walworth in 1640, with an endowment of about £60 per annum."

"STAND, (or Whitefield), a chapelry in the township of Pilkington, and parish of Prestwich, county Lancaster, 5½ miles N. of Manchester, its post town, and 1½ mile S.E. of Radcliffe railway station. The village is situated on the Bury and Manchester turnpike road. The soil is of a sandy character, with a subsoil of sand and gravel. It contains numerous villa residences. The living is a rectory in the diocese of Manchester, value £270. The church, dedicated to All Saints, has a lofty tower, with a clock and eight bells. There is a stained E. window. The church was erected in 1826, at a cost of £15,000. There is also a New Jerusalem church, with a day and Sunday school adjoining. There are National and Sunday schools. The Independents, Wesleyans, and Unitarians have chapels. The Dales, Park Hill, Stand House, and Stand Hall are the principal residences.

"PILKINGTON, a township in the parish of Prestwich, hundred of Salford, county Lancaster, 5 miles N.W. of Manchester, and 4 S.W. of Bury. It is a populous district, containing the hamlets of Unsworth, Stand, Outwood, and Whitefield, and the poorhouse for the Salford union. A large portion of the inhabitants are employed in the silk and cotton mills. A free grammar school was founded in 1688 by Henry Siddall, which has an income from land of £50. There are two other endowed schools."

"OUTWOOD, a hamlet in the township of Pilkington, parish of Prestwich, county Lancaster, 5 miles N.W. of Manchester. There is a colliery, which employs part of the inhabitants, and others are engaged in the neighbouring cotton-mills."

RINGLEY, a chapelry in Prestwich parish, Lancashire; on the river Irwell, and on the Manchester and Bury and Manchester and Bolton railway s, 6¼ miles N W of Manchester. It has a station, of the name of Ringley-Road, on the M. and Bury railway; and its post town is Bolton. Pop., 800. The living is a p. curacy in the diocese of Manchester. Value, £250.* Patron, the Rector of Prestwich. The church was built in 1851.

STAND, or Whitefield, a chapelry, with a village, in Pilkington township, Prestwich parish, Lancashire; 1½ mile SE of Radcliffe r. station, and 5½ NNW of Manchester. It was constituted in 1829; and it has a post-office under Manchester. Pop. in 1861, 8,958. Houses, 1,824. There are many good residences. Cotton manufacture, and employments akin to it, are largely carried on. The living is a rectory in the diocese of Manchester. Value, £270.* Patron, the Earl of Wilton. The church was built in 1826, at a cost of £15,000; is in the pointed style; and has a pinnacled tower, 186 feet high. There are four dissenting chapels, an endowed grammar-school, and a large national school, the last used as a chapel of ease.

In 1835 Pilkington was a township in the parish of Prestwich.

You can see the administrative areas in which Pilkington has been placed at times in the past. Select one to see a link to a map of that particular area.

A description of Pilkington in the 19th century. 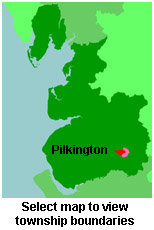 View maps of Pilkington and places within its boundaries.