Details about the census records, and indexes for Pleasington.

The Register Office covering the Pleasington area is Blackburn.

You can see pictures of Pleasington which are provided by:

"PLEASINGTON, a township in the parish of Blackburn, lower division of the hundred of Blackburn, county Lancaster, 2½ miles S.W. of Blackburn. It is a station on the Lancashire and Yorkshire railway. The village, which is of small extent and irregularly built, is situated on a height. The inhabitants are wholly engaged in agriculture. There is a Roman Catholic chapel, called Pleasington Priory, and dedicated to SS. Mary and John; it was erected at an outlay of £20,000, defrayed by the late John Francis Butler, Esq., and was opened in 1819. There is an endowed free school. Pleasington Hall and Feniscowles Hall are the principal residences. J. B. Bowden, Esq., is lord of the manor."

In 1835 Pleasington was a township in the parish of Blackburn.

You can see the administrative areas in which Pleasington has been placed at times in the past. Select one to see a link to a map of that particular area. 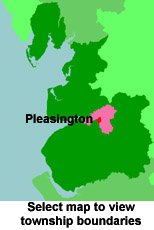 View maps of Pleasington and places within its boundaries.