POULTON-LE-SANDS, a sea-port village, a town-ship, and a chapelry, in Lancaster parish, Lancashire. The village is conjoint with Morecambe village; stands on a bight of Morecambe bay, at the terminus of a railway from Lancaster, 3¼ miles W N W of Lancaster; is a sub-port to Lancaster, and a sea-bathing place; shares in the facilities of Morecambe post-office and railway station; and has, conjointly with that village, gas-works, water-works, two good hotels, many excellent lodging-houses, good sea-bathing appliances, a fine promenade, and a four-gun battery. The township contains also the villages of Bare and Torrisholme. Acres, 1,641. Real property, £7,951. Pop. in 1851, 1,301; in 1861, 2,236. Houses, 433. The chapelry is nearly conterminate with the township, and was constituted in 1860. Pop. in 1861, 2,228. The living is a rectory in the diocese of Manchester. Value, £180.* Patron, the Vicar of Lancaster. The church is a neat building, with a tower. There are an Independent chapel, with a good spire; a Wesleyan chapel, erected in 1855; a Primitive Methodist chapel; and an endowed school, with £31 a year.

Details about the census records, and indexes for Poulton le Sands.

You can see pictures of Poulton le Sands which are provided by:

"MORECAMBE, a bay at the mouths of the rivers Kent and Leven, between Lancaster and Furness, on the coast of Lancashire. It is the Moricambe estuary of Ptolemy, and is 8 miles by 10. The Morecambe branch of the London and North-Western railway, which is only 3½ miles in length, terminates here at Poulton Creek. The bay is traversed by numerous shifting sands, as the Cartmel, Wharfe, &c. The tide has twice in the present century, viz: in 1831 and 1849, risen above 6 feet higher than usual. There is a guide stationed here by the government to conduct persons crossing the sands. Overlooking the bay is Morecambe Lodge, a modern edifice."

"TORRISHOLME, a hamlet in the parish of Lancaster, hundred of Lonsdale South of the Sands, county Lancaster, 2 miles N.W. of Lancaster. The village is situated between Morecambe Bay and the river Lune."

"POULTON-LE-SANDS, a township and chapelry in the parish of Lancaster, hundred of Lonsdale South of the Sands, county Lancaster, 3½ miles N.W. of Lancaster, its post town. It is situated on Morecambe Bay, and on the Preston and Lancashire railway, which has a branch line to Morecambe. It is a bathing place and subport to Lancaster. The North Western hotel stands near the bay, from which there is a prospect over the bay and the mountains of Westmoreland, Cumberland, and Yorkshire. The town is governed by a local board of health, established in 1852. There are steam-packets plying three times a week between Morecambe and Belfast. The township contains the hamlets of Bare and Torrisholme. The living is a perpetual curacy in the diocese of Manchester, value £120, in the patronage of the Vicar of Lancaster. The church, dedicated to the Holy Trinity, was erected in 1745, with a tower containing one bell. There is a National school for both sexes, including infants. The Wesleyans have a place of worship. The charities consist of lands bequeathed by Francis Bowes in 1732 for a school now producing an income of about £35 per annum."

In 1835 Poulton le Sands was a township in the parish of Lancaster.

Poulton le Sands in now known as Morecambe. The name Morecambe was taken from the name of the bay itself, Mwr Cwm - of Celtic origin, and used as the name of the railway (Morecambe Harbour Railway) which opened in 1848. It was originally built as the Lune was silting up and only small ships were able to travel up the river to Lancaster. The improved accessibilty led to the growth of Morecambe as a resort.

On 29th March 1889, the Local Board and Post Master General agreed to change the official name of joint townships of Poulton, Bare and Torrisholme to that of Morecambe - the name by which the resort had been known since its inception.

You can see the administrative areas in which Poulton le Sands has been placed at times in the past. Select one to see a link to a map of that particular area. 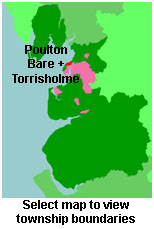 View maps of Poulton le Sands and places within its boundaries.

A map of Morecambe West, Central and East around 1890.