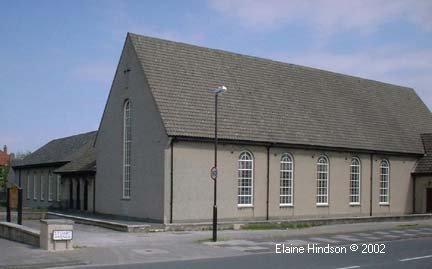 Christ Church (URC) Broadway, Morecambe is the successor to Clark Street Congregational Church, Morecambe. The present building was consecrated and opened for worship on June 25th 1955. Its first minister was the Revd F W Bakewell, MSc, who was also Senior Science Master at the Friends' School, Lancaster. He later became Headmaster of the George Fox School, (founded c.1690 as The Friends' School) Lancaster, whilst continuing his ministry in Morecambe. He had been Minister of Cherry Tree Congregational Church, Blackburn and taught at Queen Elizabeth's School, Blackburn. The Lancashire Congregational Union having been left the plot of land at the corner of Stuart Avenue and Broadway, Morecambe for the building of a Conference Centre for the Lancashire Congregational Union, and the time-scale in the legacy rapidly expiring, the entrance/vestibule area was roofed and in the presence of two QCs, a hymn having been sung, prayer offered and scripture read, the QCs representing the Lancashire Congregational Union and Morecambe and Heysham Corporation declared that the terms of the will had been fulfilled, a Church had been erected and Morecambe lost the prime site for a proposed new Library.