PREESALL-WITH-HACKENSALL, a township in Lancaster parish, Lancashire; on Lancaster bay and the river Wyre, opposite Fleetwood. Acres, 3,860; of which 965 are water. Real property, £5,351. Pop., 812. Houses, 180. The manor, with Parrox Hall, belongs to D. H. Elletson, Esq. A cemetery for this township and for Stalmine-with-Stainall, was formed in 1856; and there is an Independent chapel.

Local studies information is held at Fleetwood and Garstang libraries.

Details about the census records, and indexes for Preesall with Hackensall.

The Register Office covering the Preesall with Hackensall area is Lancaster.

You can see pictures of Preesall with Hackensall which are provided by:

"PREESALL-WITH-HACKENSALL, a township in the parish of Lancaster, hundred of Amounderness, county Lancaster, 7 miles N.E. of Poulton-le-Fylde, and 2 E. of Fleetford. The village, which is of small extent, is situated near the river Wyre, and is wholly agricultural. There is a small endowed school, also a place of worship for the Independents. There is a cemetery, which is used by this and the neighbouring township of Stalmine-with-Stainall. D. H. Elletson, Esq., is lord of the manor."

"HACKENSALL, a township in the parish of Lancaster, hundred of Amounderness, county Lancaster, 8 miles N.W. of Garstang. The village is considerable, and is united with Preesall to form a township."

In 1835 Preesall with Hackensall was a township in the parish of Lancaster.

You can see the administrative areas in which Preesall with Hackensall has been placed at times in the past. Select one to see a link to a map of that particular area. 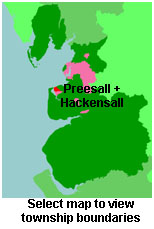 View maps of Preesall and places within its boundaries.