Details about the census records, and indexes for Prescot.

The Register Office covering the Prescot area is Prescot.

You can see pictures of Prescot which are provided by:

"THE POTTERIES, a hamlet in the parish of Prescot, hundred of West Derby, county Lancaster, 8 miles E. of Liverpool. So named from the potteries established here."

"HAIGH GREEN, a hamlet in the parish of Prescot, county Lancaster, 4 miles S. of Prescot."

You can see the administrative areas in which Prescot has been placed at times in the past. Select one to see a link to a map of that particular area.

Some information about the history of Prescot. 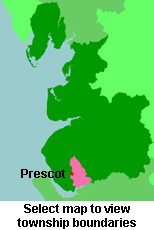 View maps of Prescot and places within its boundaries.

The Workhouse site has an interesting description of Prescot workhouse.