PRESTWICH, a small town, a township, and a sub-district, in Manchester district, and a parish partly also in Oldham and Bury districts, Lancashire. The town stands 1¼ mile E N E of the river Irwell, 1½ E by N of Clifton-Junction r. station, and 4 N N W of Manchester; contains numerous good residences; and has a post-office under Manchester, two churches, two Wesleyan chapels, a Jewish cemetery, a national school, a British school, a workhouse, the Lancashire lunatic asylum, and charities £164. St. Bartholomew's church is later English; consists of nave, aisles, two terminal chapels, and a chancel, with a tower 85 feet high; and contains a fine reredos erected in 1865, and several handsome monuments. St. Margaret's church was founded in 1848, by the Duchess of Cambridge. One of the Wesleyan chapels was built in 1867 The national school was built in 1866, at a cost of about £2,800; and is in the early English style, with high-pitched roof and brick tower. The lunatic asylum stands in the centre of extensive grounds; is a range of structures in brick, with stone facings; underwent enlargement about 1862; and has accommodation for about 1,000 patients. The workhouse is one of three for Manchester district; and, at the census of 1861, had 66 in-mates. The township comprises 1,906 acres. Real property, £21,725. Pop. in 1851, 4,096; in 1861, 5,288. Houses, 973. The sub-district contains also Great Heaton and Little Heaton townships, and comprises 3,281 acres. Pop. in 1851, 5,046; in 1861, 6,285. Houses, 1,168. The parish contains also the townships of Pilkington, Oldham, Chadderton, Tonge, Alkrington, Royton, and Crompton; and is ecclesiastically cut into the sections of Prestwich, Hollinwood, Ringley, Prestolee, Oldham, St. Mary, O., St. Peter, O., St. James, Chadderton, St. John, C., St. Matthew, Coldhurst, East Crompton, Glodwick, Werneth, Waterhead, Royton, Shaw, Unsworth, and Tonge-with-Alkrington. Acres, 21,625. Pop. in 1851, 94,470; in 1861, 117,961. Houses, 23,039. The living of Prestwich is a rectory united with the chapelry of St. Margaret, and all the other livings are p.curacies, in the diocese of Manchester. Value of the rectory, £1,230.* Patron, the Earl of Wilton. The other livings are noticed in the articles on their own several localities.

Details about the census records, and indexes for Prestwich.

The Register Office covering the Prestwich area is Bury.

You can see pictures of Prestwich which are provided by:

"PRESTWICH, (or Prestwich cum Oldham) a parish and township in the hundred of Salford, county Lancaster, 4 miles N.W. of Manchester, its post town, and 5 S.E. of Bury. It is situated on the old turnpike road from Bury to Manchester, and contains the townships of Prestwich, Great-Heaton, Little-Heaton, Tonge-with-Alkrington, Oldham, Chadderton, Crompton, Royton, and Pilkington, most of which are described under their several heads. A large portion of the inhabitants are employed in the cotton mills. [See Oldham.] The county lunatic asylum is a range of brick buildings faced with stone. It includes a chapel, erected in 1851. Near the centre of the parish is a Jewish cemetery, formed in 1841. The living is a rectory with the curacy of St. Margaret's annexed, in the diocese of Manchester, value £1,230. The church, dedicated to St. Bartholomew, is an ancient structure of red sandstone, with a lofty square tower containing a clock and six bells. Adjoining it is the Wilton chapel, containing several monuments to the Earls of Wilton. The parochial charities produce about £40 per annum. On a site presented by the Earl of Wilton, stands St. Margaret's Chapel, the foundation-stone of which was laid by the Duchess of Cambridge, in 1848. There are numerous district churches, also National, British, and infant schools. Among the principal residences are Butt-Hill, Prestwich Lodge, Headlands, and Wood Hill. T. Drinkwater, Esq., is lord of the manor and principal landowner."

In 1835 the parish of Prestwich contained the townships of Prestwich, Pilkington, Unsworth, Little Heaton, Great Heaton,

You can see the administrative areas in which Prestwich has been placed at times in the past. Select one to see a link to a map of that particular area. 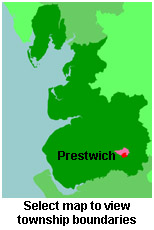 View maps of Prestwich and places within its boundaries.

The Workhouse site has an interesting description of Prestwich workhouse.