RAINFORD, a village, a township-chapelry, and a sub-district, in Prescot parish and district, Lancashire. The village stands on the Ormskirk and St. Helens railway, 1 mile S S E of that railway 's intersection by the Liverpool and Wigan railway, and 4¼ miles N W by N of St. Helens; and has a station on the railway, and a post-office under St. Helens. The chapelry comprises 5,803 acres. Real property, £12,623; of which £3,280 are in mines. Pop. in 1851, 2,333; in 1861, 2,784. Houses, 478. The increase of pop. arose from the opening of new collieries. The property is divided among a few. The manor belongs to the Earl of Derby. R. Hall, Mount Pleasant, and the Rookery are chief residences. Much of the land is reclaimed morass. Tobacco-pipemaking is largely carried on. The living is a p. curacy in the diocese of Chester. Value, £135.* Patron, the Vicar of Prescot. The church is a plain building, with a belfry. There are an Independent chapel, an endowed school for boys, and a national school for girls. The sub-district is conterminate with the chapelry.

Details about the census records, and indexes for Rainford.

The Register Office covering the Rainford area is St Helens.

You can see pictures of Rainford which are provided by:

"RAINFORD, a chapelry in the parish of Prescot, hundred of West Derby, county Lancaster, 6 miles N.E. of Prescot, its post town, and 4½ from St. Helen's. It is a station on the W. section of the Lancashire and Yorkshire railway. A considerable portion of the land now drained was formerly a morass. There are tobacco-pipe and crucible manufactories. The village is considerable. The living is a perpetual curacy in the diocese of Chester, value £135, in the patronage of the Vicar of Prescot. The church, which was built as a chapel-of-ease to Prescot, is an ancient edifice. The charities produce about £30 per annum, which goes towards the support of a school."

In 1835 Rainford was a township in the parish of Prescot.

You can see the administrative areas in which Rainford has been placed at times in the past. Select one to see a link to a map of that particular area. 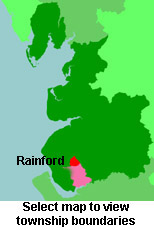 View maps of Rainford and places within its boundaries.