RAINHILL, a village, a township, and a chapelry, in Prescot parish, Lancashire. The village stands on the Liverpool and Manchester railway, 9 miles E of Liverpool; carries on manufactures of watch-movements, brooches, and other articles; has also iron-works, a foundry, and a varnish factory; a large engine factory and foundry; and has a station on the railway, a post-office under Prescot, a church, a Wesleyan chapel, a Roman Catholic chapel, and national schools. The church was built in 1837, and enlarged in 1843 and 1868; and consists of nave and aisles, with tower and spire. The Roman Catholic chapel was built by the late B. Bretherton, Esq.; is a large and highly ornate edifice; consists of nave, aisles, and chancel, with a tower; and has, in connexion with it, a school and a convent. The township comprises 1,642 acres. Real property, £8,959; of which £130 are in iron-works. Pop. in 1851, 1,522; in 1861, 2,130. Houses, 384. Numerous villas stand on a hill, and command fine views over the Mersey into Cheshire. The chapelry is more extensive than the township, and was constituted in 1840. Pop. in 1861, 2,608. Houses, 447. The living is a p. curacy in the diocese of Chester. Value, £300.* Patron, the Rev. J. Brierley.

Details about the census records, and indexes for Rainhill.

The Register Office covering the Rainhill area is Knowsley.

You can see pictures of Rainhill which are provided by:

"RAINHILL, a township in the parish of Prescot, hundred of West Derby, county Lancaster, 3 miles S.E. of Prescot, its post town, and 6¾ from Newton. It is a station on the Liverpool and Manchester section of the London and North-Western railway. The district is studded with villas and well-built residences. A large portion of the inhabitants are engaged in the manufacture of watchmakers' tools. The living is a perpetual curacy in the diocese of Chester, value £178. The church is modern, built by subscription."

In 1835 Rainhill was a township in the parish of Prescot.

You can see the administrative areas in which Rainhill has been placed at times in the past. Select one to see a link to a map of that particular area. 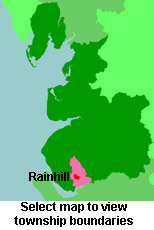 View maps of Rainhill and places within its boundaries.