RAMSBOTTOM, a small town and a chapelry in Bury parish, Lancashire. The town stands on the river Irwell and on the East Lancashire railway, 4 miles N of Bury; was the place where the first Sir Robert Peel established calico-printing; carries on cotton spinning, calico-printing, machine-making, rope-making, and iron and brass founding; is governed by a local board, under the act of 1858; and has a post-office under Manchester, a railway -station with telegraph, a commodious inn, a police station, a church, four dis-senting chapels, a Roman Catholic chapel, a public school, an athenæum, a public library, and an Odd Fellows' hall. The church was built in 1850, at a cost of £3,400; was enlarged shortly before 1868; is in the early English style; and has a memorial window to the late Lord Palmerston, and a tower and spire. The Presbyterian chapel was built in 1834; is a handsome edifice, in the pointed style; and has a lofty pinnacled tower. The chapelry was constituted in 1844. Pop. in 1861, 4,134. Houses, 798. The living is a p. curacy in the diocese of Manchester. Value, £170. Patron, alternately the Crown and the Bishop.

Details about the census records, and indexes for Ramsbottom.

The Register Office covering the Ramsbottom area is Bury.

You can see pictures of Ramsbottom which are provided by:

"RAMSBOTTOM, a village and ecclesiastical district in the parish of Bury, hundreds of Blackburn and Salford, county Lancaster, 4 miles N. of Bury, and 9 N.W. of Manchester. It is a station on the East Lancashire section of the Lancashire and Yorkshire railway. It is situated near the rivers Irwell and Roche, and forms a suburb of the town of Bury. The living is a perpetual curacy in the diocese of Manchester, value £710, in the patronage of the crown and bishop alternately. The church is a modern structure. The Wesleyans have a place of worship."

In 1835 Ramsbottom was located in the township of Tottington Lower End in the parish of Bury.

You can see the administrative areas in which Ramsbottom has been placed at times in the past. Select one to see a link to a map of that particular area. 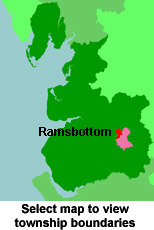 View maps of Ramsbottom and places within its boundaries.