RAWTENSTALL, a town and a chapelry in Whalley parish, Lancashire. The town stands on the Manchester, Bury, and Bacup railway, 8 miles N by E of Bury; was, not long ago, a secluded village; consists now of regular and well-built streets; is a seat of petty sessions, and a polling-place; carries on cotton and woollen manufactures; and has a r. station with telegraph, a post-office under Manchester, a hotel, a mechanics' institution, a church, four dis-senting chapels, a Roman Catholic chapel, and four large public schools. The church was built in 1837 at a cost of £2,500; and has an embattled tower. The Wesleyan chapel is at Longholme; and was built in 1842, at a cost of nearly £5,000. The United Free Methodist chapel was built in 1862, at a cost of more than £6,000; and is in the Corinthian style. The Unitarian chapel was built in 1853, the Roman Catholic chapel in 1844, each at a cost of £1,500, and are in the pointed style. The chapelry was constituted in 1841. Pop. in 1861, 7,823. Houses, 1,562. The living is a p. curacy in the diocese of Manchester. Value, £300.* Patrons, Trustees.

Details about the census records, and indexes for Rawtenstall.

The Register Office covering the Rawtenstall area is Hyndburn and Rossendale.

You can see pictures of Rawtenstall which are provided by:

"RAWTENSTALL, a village and ecclesiastical district in the parish of Whalley, county Lancaster, 2 miles E. of Haslingden, and 16 N. of Manchester. It is a station on the Manchester, Bury, and Bacup section of the Lancashire and Yorkshire railway. The village is situated in the valley of the river Irwell, near Rosendale Forest. Many of the inhabitants are employed in the neighbouring woollen and cotton mills. There are a savings-bank and post-office in the village, which has much increased of late years. The living is a perpetual curacy in the diocese of Manchester, value £300. The church is a modern structure."

You can see the administrative areas in which Rawtenstall has been placed at times in the past. Select one to see a link to a map of that particular area. 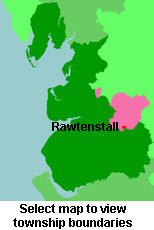 View maps of Rawtenstall and places within its boundaries.