RISHTON, a village and a township in Blackburn parish, Lancashire. The village stands near the East Lancashire railway and the Leeds and Liverpool canal, 3½ miles N E by E of Blackburn; and has a station on the railway, and a post-office under Blackburn. The township contains also the hamlet of Tottleworth, and comprises 2,760 acres. Real property, £6,044; of which £1,128 are in mines and £231 in quarries. Pop. in 1851, 800; in 1861, 1,198. Houses, 215. The manor belongs to H. Petre, Esq. There are a large cotton factory, a large reservoir, collieries, and fire-brick works.

Details about the census records, and indexes for Rishton.

The Register Office covering the Rishton area is Hyndburn and Rossendale.

You can see pictures of Rishton which are provided by:

"RISHTON, a township in the parish of Blackburn, lower division of the hundred of Blackburn, county Lancaster, 3 miles N.E. of Blackburn. It is a station on the East Lancashire railway. The village, which is considerable, is situated on the Blackburn and Burnley turnpike-road, and near the Leeds and Liverpool canal. There is an extensive reservoir. A portion of the inhabitants are engaged in the collieries, stone-quarries, and in the neighbouring cotton-mills. Fire-bricks are made in this township. The soil consists of peat sand and clay, with a subsoil of stone and clay. Henry Petre, Esq., is lord of the manor."

In 1835 Rishton was a township in the parish of Blackburn.

You can see the administrative areas in which Rishton has been placed at times in the past. Select one to see a link to a map of that particular area. 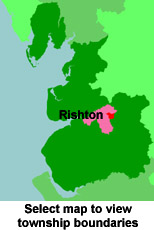 View maps of Rishton and places within its boundaries.