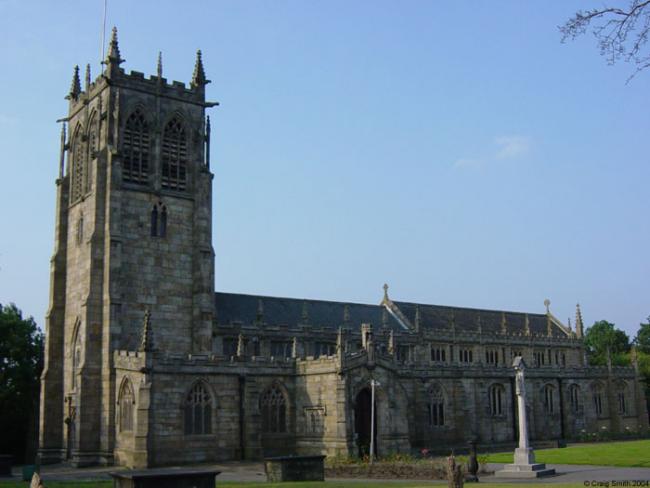 The mother church of the parish is of great antiquity, and stands on a commanding eminence, the ascent to which is by a flight of 124 steps. The church was erected in the 12th century, and has undergone various changes, alterations, and renovations. The local legend is, that the site of the church was, in point of fact, the place chosen by spirits and fairies for the purpose. On several occasions, as the story relates, the materials brought together for the erection of the church, on an entirely different site, were removed from the place originally selected to the hill or eminence on which St. Chad's stands. That this removal was the work of superhuman agency, was the firm belief of our forefathers in those far-distant days; and we should be sorry to do or say anything which could in the remotest manner interfere with this time-hallowed belief, which has been handed down to us, and which, with vast numbers among us, is received with the greatest deference and respect.

The site ultimately adopted, under such supernatural pressure, led, of course, to the formation of the celebrated church steps; to ascend which is always considered a necessary piece of work to be performed by all visitors to our good old town. To come to Rochdale and not mount the steps is considered a breach of good manners, as well as a serious deprivation of a very agreeable exercise. The steps, in fact, are among our most cherished possessions; and they form a most important thoroughfare, with which it would be very unwise to intermeddle to the great prejudice of the inhabitants. [more follows on the churchyard, events associated with the church, its rectors and vicars]

'Rochdale Past and Present, a History and Guide' by William Robertson, 2nd edition, Rochdale: Schofield and Hoblyn, 1876 (pages 97-105)