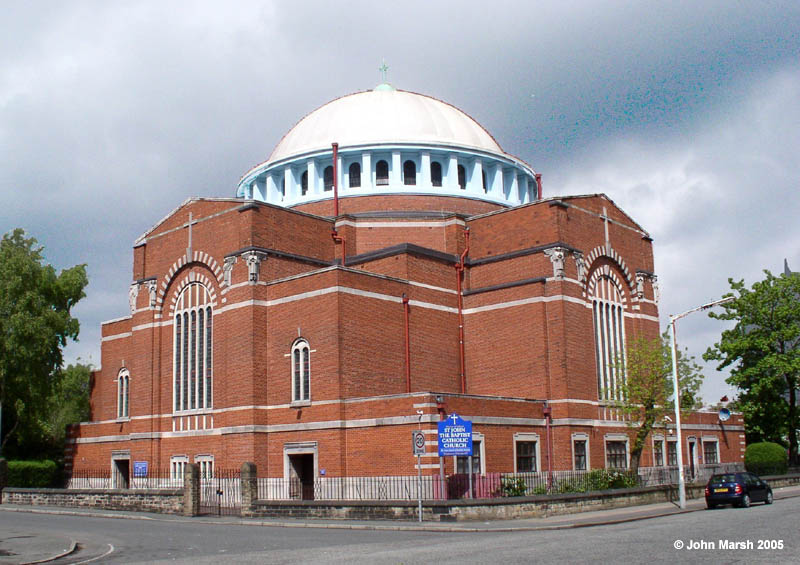 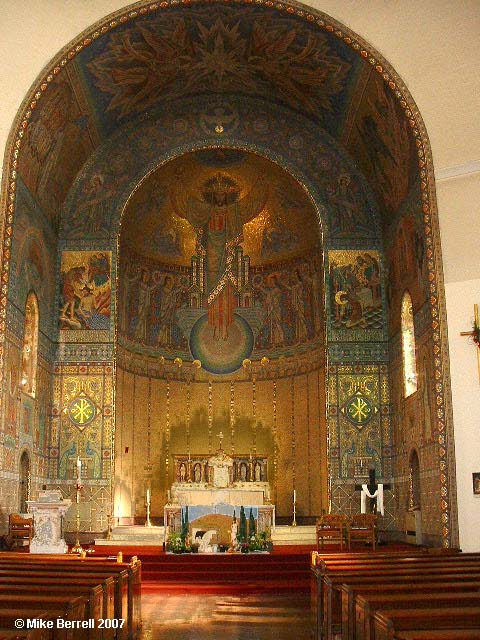 The old church on Ann Street did have a graveyard. It was probably used from 1829 until Rochdale Cemetery was built. After the new church was built Fr Brown's remains, which were in the old church were re-interred in Fr. Dowling's grave at Rochdale Cemetery. Recently when making a car park on the site of the old Church/School/Presbytery other remains were found. These too have been re-interred in Fr. Dowling's Grave

The first Catholics in the district were dependent on Manchester or Bolton for the sacraments. Their names are in the old registers of St. Chad's, Rook Street, Manchester or at Bolton. 1824 seems to have brought the first resident priest, Fr. Michael Trappes, who was also in charge of Bury. He was succeeded shortly after 1826 by Fr. William Turner, later elected Bishop. It is not certain where Mass was first said. One tradition mentions that a room in a mill was hired in Clegg Street, but one old lady remembered being taken to a chapel called "Cotton Tree", which would suggest that a room was hired in a public house. The first church of any kind was opened in 1830. Fr. H. Walmsley ministered here from 1832 to 1834, when he was followed by Fr. E. Brown, who sacrificed his life in the care of the sick during an epidemic. It is thought, that the first schools of the parish were held in cellars under the presbytery, attached to the chapel. According to tradition Fr. Turner was so poor that he was obliged to walk from Rochdale to Bury, to say Mass. In these early days many of the Catholic population had to walk long distances to hear Mass. A great deal of work for the parish was done during the long tenure of Father John Dowling, who was here from 1839 to his death in 1871. A brick church, capable of housing 500 people, and increased school accommodation were provided in 1860. St. Patrick's, Rochdale, was separated in 1860, and gradually other districts were cut off from the mother parish Whitworth opened 1860, Todmorden 1868, Littleborough 1879, Castleton 1879, Norden 1904. The parish has been governed by a succession of distinguished and eminent clergy Canon Edward O'Neill (1874-1895) came here after labouring for 17 years as chaplain to Manchester Infirmary and Workhouse; Canon John Boulaye, later Provost and Vicar General, was here for a time, and from 1898 to 1937 Canon Henry Chipp governed the parish and presided over the building of the present beautiful Byzantine church, finished in 1925. In recent years the parish has been under the care of Canon P. Kelly, Canon Theologian of the diocese.

Taken from 'Salford Diocese and its Catholic past', a survey by Charles A. Bolton, a Priest of the above Diocese. Published 1950 on the First Centenary for the Diocese of Salford.

(pp 130-131)
This is the first Roman Catholic place of worship erected in this town.... It was built by subscription, in 1829, by the late Dr. Turner, Bishop of Salford, who was then a humble but very zealous and devoted priest, and had charge of a little flock who had previously met for worship in a room behind Alderman Willans's woollen warehouse, in Clegg-street, behind John-street. [more on the priests]

From 'Rochdale Past and Present, a History and Guide' by William Robertson, 2nd edition, Rochdale: Schofield and Hoblyn, 1876. All of the material is direct quotation except for the words in [square brackets] and has been provided by Charlie Watson. The square bracket material found at the end of most entries indicates where further information can be found in the book.