ROYTON, a large village, a township-chapelry, and a sub-district, in Oldham district, Lancashire. The village stands at the terminus of the Manchester, Oldham, and Royton railway, near the junction with it of the Oldham and Rochdale railway, 2 miles N N W of Oldham; is a place of some antiquity and note; numbers among its natives the mathematicians Butterworth and Kay, and the botanist Mellor; carries on industry in large cotton factories; and has a post-office under Oldham, a railway station with telegraph, another r. station at R. r. junction, a police station, a public-bath, a church, three dis-senting chapels, a national school, and several libraries, improvement societies, and other insituations. The chapelry comprises 1,352 acres, and is in Prestwich parish, and within Oldham borough. Real property, £20,566; of which £628 are in mines, and £220 in gas-works. Pop. in 1851, 6,974; in 1861, 7,493. Houses, 1,562. The property is not much divided. R. Hall was given, by Edward II., to Sir John de Byron; belongs now, to Sir J. Radcliffe, Bart., the chief landed proprietor; and has been divided into tenements. The living is a p. curacy in the diocese of Manchester. Value, £300.* Patron, the Rector of Prestwich. The sub-district contains also the township of Thornham, and comprises 3,350 acres. Pop. in 1851, 8,484; in 1861, 9,520. Houses, 1,941.

Details about the census records, and indexes for Royton.

The Register Office covering the Royton area is Oldham.

You can see pictures of Royton which are provided by:

"ROYTON, a township and chapelry in the parish of Prestwich, hundred of Salford, county Lancaster, 2 miles N.W. of Oldham, its post town, and 3 N.E. of Middleton. It is a junction station on the Oldham and Rochdale branch of the Lancashire and Yorkshire railway. The village is situated on the road to Rochdale. Previous to the commencement of the present century, it contained only a few straggling cottages, but has now assumed the appearance of a considerable town, consisting of several regular streets and large factories. A large portion of the inhabitants are engaged in the cotton mills, and in the extensive coal mine, and brass and iron foundries. Stone is quarried to some extent. There is a public bath. The living is a perpetual curacy in the diocese of Manchester, value £300, in the patronage of the Rector of Prestwich. The church, dedicated to St. Paul, was built by subscription in 1754. There is a National school; also a village school. John Butterworth, and his friend, John Kay, were natives of this parish. The Wesleyans, Calvinistic Methodists, and Society of Friends, have each a place of worship."

In 1835 Royton was a township in the parish of Oldham.

You can see the administrative areas in which Royton has been placed at times in the past. Select one to see a link to a map of that particular area. 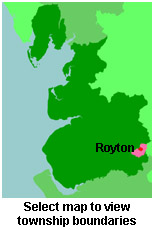 View maps of Royton and places within its boundaries.