SAMLESBURY, a township-chapelry in Blackburn parish, Lancashire; on the river Ribble, 2 miles E S E of Fulwood r. station, and 3¾ E by N of Preston. It contains part of Mellor-Brook hamlet, which has a post-office under Blackburn, and Roach hamlet, which has a cotton-mill. Acres, 4,270. Real property, £6,951; of which £10 are in quarries. Pop. in 1851, 1,435; in 1861, 1,215. Houses, 236. S. Old Hall is the seat of J. Harrison, Esq.; was erected in 1530, by Sir T. Southworth; was moated till the formation of the new road from Preston to Blackburn; contains a great hall, constructed of Massive and elegantly carved oak timbers; and was restored and finely embellished in 1864. Roach Hall dates from 1675, was long the residence of the Hoghton family, and is now a farm-house. The living is a p. curacy in the diocese of Manchester. Value, £150.* Patron, the Vicar of Blackburn. The church is ancient. There are a Roman Catholic chapel, a national school, and charities £35.

Details about the census records, and indexes for Samlesbury.

You can also perform a more selective search for churches in the Samlesbury area or see them printed on a map.

You can see pictures of Samlesbury which are provided by:

Ask for a calculation of the distance from Samlesbury to another place.

In 1835 Samlesbury was a chapelry and township in the parish of Blackburn.

You can see the administrative areas in which Samlesbury has been placed at times in the past. Select one to see a link to a map of that particular area. 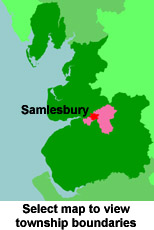 View maps of Samlesbury and places within its boundaries.