SCARISBRICK, a village, a township-chapelry, and a sub-district, in Ormskirk parish and district, Lancashire. The village stands on the Leeds and Liverpool canal, 3 miles N W of Ormskirk r. station; and has a post-office under Ormskirk. The chapelry contains also the hamlets of Bescar and Snape-Green. Acres, 8,377. Real property, £13,752; of which £23 are in quarries. Pop., 2,112. Houses, 363. The manor, with S. Hall, belongs to Lady Scarisbrick. The living is annexed to Ormskirk. The church is in the later English style. There are chapels for Wesleyans and Roman Catholics, an endowed school with £18 a year, and charities £19. The sub-district contains also Burscough township, and comprises 13,336 acres. Pop., 4,573. Houses, 841.

Details about the census records, and indexes for Scarisbrick.

The Register Office covering the Scarisbrick area is West Lancashire.

You can see pictures of Scarisbrick which are provided by:

"SCARISBRICK, a township in the parish of Ormskirk, hundred of West Derby, county Lancaster, 3 miles N.W. of Ormskirk, its post town, and near the Burscough railway station. The village, which is large, is situated on the Leeds canal. The township includes a part of Martin-Mere, which was drained in 1799 by Mr. Eccleston. The soil is of a loamy and sandy nature, with a subsoil of sand. There are brick kilns. The living is a curacy annexed to the vicarage of Ormskirk, in the diocese of Chester. The church is dedicated to St. Mark. The interior of the church contains a carved pulpit. The parochial charities produce about £18 per annum. There is a National school for boys, also British and Foreign schools. The Wesleyans and Roman Catholics have each a place of worship. Among the principal seats are Dummersdale, Gorsuch Hall, Biglake, Heskin Hall, Hurlston Hall, Fairlake, and Scarisbrick Hall-which last is an ancient mansion situated in a park; the hall contains some pictures by Martin and other masters, and is now the seat of C. Scarisbrick, Esq., who is lord of the manor and holds a court-leet annually."

In 1835 Scarisbrick was a township in the parish of Ormskirk.

You can see the administrative areas in which Scarisbrick has been placed at times in the past. Select one to see a link to a map of that particular area. 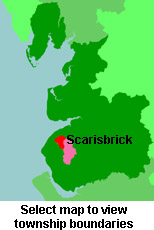 View maps of Scarisbrick and places within its boundaries.