SEPHTON, or Sefton, a township and a parish in West Derby district, Lancashire. The township lies on.the river Alt, near the Leeds and Liverpool canal, 2 miles W of Mughall r. station, and 6½ N of Liverpool; has a post-office under Liverpool; and gives the title of Earl to the family of Molyneux. Acres, 1,233. Real property, £3,491. Pop., 430. Houses, 73. The manor was given, at the Norman conquest, to William de Moline or Molyneux; and, with Croxteth Park, belongs now to the Earl of Sephton. The Liverpool race-course is here; and has a grand stand of 1830, lofty, spacious, and commanding an extensive view. The parish contains also the townships of Lunt, Netherton, Aintree, Orelland Ford, Litherland, Thornton, Ince-Blundell, and Little Crosby, and the chapelry of Great Crosby; and extends to the sea. Acres, 21,168; of which 8,675 are water. Pop. in 1851, 7,278; in 1861, 10,159. Houses, 1,730. The living is a rectory in the diocese of Chester. Value, £1,825.* Patron, the Marquis de Rothwell. The church is of the time of Henry VIII., and has a tower and spire. The p. curacies of Seaforth, Aintree, Litherland, Waterloo-Christchurch, Waterloo, St. John, and Great Crosby are separate benefices. There are a national school, and charities £116.

Details about the census records, and indexes for Sefton.

You can see pictures of Sefton which are provided by:

"SEFTON, (or Sephton), a parish in the hundred of West Derby, county Lancaster, 6½ miles N. of Liverpool, its post town. The parish, which is situated on the river Alt and the Leeds and Liverpool canal, is bounded on the W. by the Bay of Liverpool. The parish contains Great Crosby, a much frequented bathing place, and the townships of Crosby, Seaforth, Waterloo, Aintree, Ince-Blundell, Litherland, Lunt, Netherton, Orrell, Sefton, and Thornton. The manor was given at the Conquest to William de Moline, or Molyneux, ancestor of the earls of Sefton, of which family was Sir William, who fought under the Black Prince at Navarre, as did Sir Richard at the battle of Agincourt, and another Sir William distinguished himself at the battle of Flodden Field. A portion of the land is in meadow. The living is a rectory in the diocese of Chester, value £1,378. The church, dedicated to St. Helen, is an ancient structure, with a tower surmounted by a lofty spire and containing six bells. The interior of the church, which was rebuilt in the reign of Henry VII., contains several carved stalls, a screen, effigies and brasses to the Molyneux family. In addition to the parish church are the following district churches, viz: Great Crosby, Seaforth, St. Peter's, Aintree; St. John's and Christ Church, Waterloo; the livings of which are all perpetual curacies varying in value from £119 to £87. The parochial charities produce about £116 per annum. There is a National school for both sexes. Croxteth Hall is the seat of the Earl of Sefton, who is lord of the manor, and takes his title from this place."

You can see the administrative areas in which Sefton has been placed at times in the past. Select one to see a link to a map of that particular area. 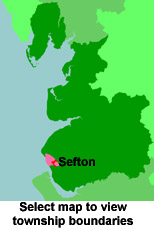 View maps of Sefton and places within its boundaries.