SILVERDALE, a village and a township-chapelry in Warton parish, Lancashire. The village stands on Morecambe bay, near the Lancaster and Ulverstone railway, 4½ miles NW of Carnforth; is a sea-bathing resort; and has a r. station with telegraph, a post-office under Lancaster, a hotel, and good lodging-houses. The chapelry comprises 1,145 acres. Real property, £1,262. Pop., 294. Houses, 58. The living is a p. curacy in the diocese of Manchester. Value, £200.* Patron, the Vicar of Warton. The church was built in 1679, and enlarged in 1829.

Details about the census records, and indexes for Silverdale.

The Register Office covering the Silverdale area is Lancaster.

You can see pictures of Silverdale which are provided by:

"SILVERDALE, a township in the parish of Warton, hundred of Lonsdale South of the Sands, county Lancaster, 11 miles N. of Lancaster, its post town, 5 S.W. of Burton-in-Kendal, and 6 N. of the Carnforth railway station. It is a station on the Lancaster railway. The village, which is of small extent, is situated on Morecambe Bay. The living is a perpetual curacy in the diocese of Manchester, value £80, in the patronage of the Vicar of Warton. The church, erected in 1679, was restored and enlarged in 1829. The parochial charities produce about £12 per annum."

In 1835 Silverdale was a township in the parish of Warton.

You can see the administrative areas in which Silverdale has been placed at times in the past. Select one to see a link to a map of that particular area. 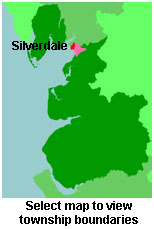 View maps of Silverdale and places within its boundaries.