Details about the census records, and indexes for Southport.

The Register Office covering the Southport area is Sefton North.

You can see pictures of Southport which are provided by:

"SOUTHPORT, a chapelry, post town, and watering-place in the parish of North Meols, hundred of West Derby, county Lancaster, 7½ miles N.W. of Ormskirk, and 22 N. of Liverpool. It is a station on the Lancashire and Yorkshire railway. It is situated on the sands at the mouth of the river Ribble, and has of late years been much resorted to for sea-bathing. It was, at the commencement of the present century, a cluster of fishermen's huts, called South Hawes, but is now a town consisting of 13 streets, the chief of which is called Lord-street, extending nearly a mile in length. In this street is the townhall, erected in 1853 at an outlay of £4,500. There are also a market-house, savings-bank, theatre, &c. It is lighted with hydrocarbonic gas, and is well paved and supplied with excellent water. It is much resorted to by invalids in consequence of its mild atmosphere and general salubrity. The living is a perpetual curacy in the diocese of Chester, value £469. Besides the parish church there is also Trinity church, situated in Iloghton-street. The Roman Catholics, Wesleyans, Independents, and Primitive Methodists have each a chapel, and there is a Friends' meeting-house. The principal residences are Martindale Lodge, Sea-view House, &c."

Southport is located in the area that used to be the townships of Birkdale and North Meols in the parish of North Meols.

You can see the administrative areas in which Southport has been placed at times in the past. Select one to see a link to a map of that particular area. 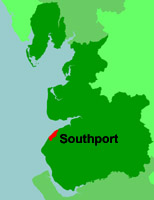 View maps of Southport and places within its boundaries.