MICHAEL-ON-WYRE (ST.), a village and sub-district in Garstang district, and a parish partly also in Fylde and Preston districts, Lancashire. The village stands on the river Wyre, 3 miles W by N of Brock r. station, and 3½ SW of Garstang; is in the township of Upper Rawcliffe-with-Tarnacre; and has a neat stone bridge over the river. The sub-district comprises the St. Michael townships of Out-Rawcliffe, Upper-Rawcliffe-with-Tarnacre, Great Eccleston, and Inskip-with-Sowerby, the Lancaster township of Myerscough, and the Garstang township of Bilsborrow. Acres, 15,965. Pop., 3,359. Houses, 638. The parish, in addition to its four townships in the sub-district, contains the townships of Elswick and Wood-Plumpton. Post town, Garstang, Lancashire. Acres, 18,114; of which 180 are water. Real property, £29,570. Pop. in 1851, 4,680; in 1861, 4,509. Houses, 879. The property is much subdivided. The manors of Upper Rawcliffe and Inskip belong to the Earl of Derby; that of Out-Rawcliffe belongs to the representatives of the late R. W. France, Esq.; and that of Wood-Plumpton belongs to Birley, Esq. Rush cutting is largely carried on in Great Eccleston; and tiles and drain-pipes are extensively made in Wood-Plumpton. The living is a vicarage in the diocese of Manchester. Value, £580.* Patron, the Rev. W. Hornby. The church is of the time of Henry VIII.; succeeded an ancient one, supposed to have been built about 640; comprises nave and aisles, with battlemented tower; and includes a N oratory, formerly the mortuary chapel of the Butler family. The chapelries of Cop or Great Eccleston, Out-Rawcliffe, Inskip, and Wood-Plumpton are separate benefices. There are, in the several townships, a Baptist chapel, three Wesleyan chapels, two Primitive Methodist chapels, two Roman Catholic chapels, two endowed schools and three national schools. There are also, in Wood-Plumpton, a police station and a small workhouse.

Details about the census records, and indexes for St Michaels.

The Register Office covering the St. Michaels on Wyre area is Lancaster.

You can see pictures of St Michaels-on-Wyre which are provided by:

"ST. MICHAEL-ON-WYRE, a parish in the hundred of Amounderness, county palatine of Lancaster, 3 miles S.W. of Garstang, its post town. The parish, which is extensive, is situated on the navigable river Wyre, the mouth of which forms a harbour. It contains the townships of Copp, Inskipp, Rawcliffe, Wood Plumpton, Eccleston, and Elswick. The parish is partly in Garstang, Fylde, and Preston unions. A portion of the land is moory, and a small quantity in woodland, the remainder is arable and pasture in nearly equal proportions. The tithes were commuted for corn-rents, under an Enclosure Act in 1816. The living is a vicarage in the diocese of Manchester, value £550. The church, dedicated to St. Michael, is a structure of Henry VIII.'s time, erected on the site of a much older one, said to have been one of three erected in this district shortly after the introduction of Christianity. In addition to the parish church, are the following district churches, viz: at Copp, Out-Rawcliffe, Inskip, and Wood Plumpton. The last-named is the most ancient, having been erected in 1640. Copp church was built in 1700, and Rawcliffe in 1838. There are National and other schools."

In 1835 the parish of St Michaels contained the townships of Out Rawcliffe, Upper Rawcliffe, Elswick, Great Eccleston, Inskip with Sowerby, Newsham and Woodplumpton.

You can see the administrative areas in which St Michaels-on-Wyre has been placed at times in the past. Select one to see a link to a map of that particular area. 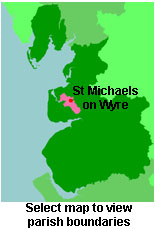 View maps of St Michaels-on-Wyre and places within its boundaries.