"Stalybridge (or Staleybridge), parl. and mun. bor., and manufacturing town, Stockport and Mottram in Longden Dale pars., Cheshire, and Ashton under Lyne par., Lancashire, on river Tame, 7½ miles E. of Manchester by rail - mun. bor., pop. 25,977; parl. bor., 2214 ac., pop. 42,863; 2 Banks, 2 newspapers. Market-day, Saturday. Stalybridge is said to derive its name from the Staveleighs, who formerly resided here; but the town is entirely modern, dating from the year 1776. It has communication in all directions by railway. The principal mfrs. are the spinning of cotton yarns and the weaving of calicoes, but there are also numerous iron foundries and machine shops. Stalybridge was made a mun. bor. in 1857, and a parl. bor. in 1867; its municipal limits were extended in 1881, and its parliamentary limits in 1885. It returns 1 member to Parl."

Local studies information previously housed at Stalybridge is now held in the new Local Studies and Archives Centre at Tameside Central Library in Ashton. They have made available a summary of the records, and finding aids that they hold.

Details about the census records, and indexes for Stalybridge.

The Register Office covering the Stalybridge area is Tameside.

You can see pictures of Stalybridge which are provided by:

"STALYBRIDGE, a chapelry, township, market and post town in the parish of Ashton-under-Lyne, hundred of Salford, county Lancaster, 2 miles W. of Ashton, and 8 N.E. of Stockport. It is connected by branch lines with the London and North-Western, the Manchester, Sheffield, and Lincolnshire, and Lancashire and Yorkshire railways. It is a prosperous manufacturing town, situated upon the Tame, under a hill called "Wild Bank," which rises 1,300 feet above sea-level. This place derives its name from the Staveleighs, a family who resided here, and from the bridge over the river, which has recently been rebuilt at an expense of £4,000, and connects the county of Lancaster with that of Chester. The growth of the town has been rapid since 1776, when the first cotton-mill was erected here. The streets are paved and lighted with gas, and there is an abundant supply of good water. The staple trade is in cotton-spinning, but it, and the cloth trade, once predominant, have declined. Large quantities of firebricks are manufactured. The population of the borough is probably nearly 27,000. It contains a townhall, lock-up, savings-bank, news-room, and two commercial branch banks. The Huddersfield canal passes in the vicinity. There are five churches in the borough, St. Paul's, St. John's, Dukinfield, St. George's, Holy Trinity, and the old chapel of the place, St. George Cockerhill. Market day is Saturday. A fair is held on 5th March."

A parish (SJ 9798) created in 1894 out of Stayley and part of Dukinfield (in Cheshire) and part of Ashton under Lyne (in Lancashire). Transferred to the county of Greater Manchester in 1974. Please also see the Stalybridge, Cheshire pages.

You can see the administrative areas in which Stalybridge has been placed at times in the past. Select one to see a link to a map of that particular area. 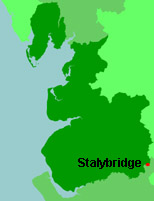 View maps of Stalybridge and places within its boundaries.