STRETFORD, a township, a chapelry, and a sub-district, on the S border of Lancashire. The township lies on the Manchester and Altrincham railway, 4 miles SW of Manchester; is in Manchester parish; includes Old Trafford chapelry; contains many handsome villa residences, a public hall, a temperance institute, the Manchester botanic garden, the asylum for the blind, the school for the deaf and dumb, two churches, five dissenting chapels, a Roman Catholic chapel of 1864, and a large national school; and has a r. station with telegraph, and a post-office, designated Stretford, Lancashire. Acres, 3,140. Real property, £42,938; of which £500 are in gasworks. Pop. in 1851, 4,998; in 1861, 8,757. Houses, 1,668. The chapelry was constituted in 1854. Pop., 3,882. Houses, 791. The living is a rectory in the diocese of Manchester. Value, £405.* Patrons, the Dean and Chapter of M. The church was rebuilt in 1841. The sub-district comprises S. township and Flixton parish, and is in Barton-upon-Irwell district. Acres, 5,689. Pop., 10,807. Houses, 2,077.

Details about the census records, and indexes for Stretford.

The Register Office covering the Stretford area is Trafford.

You can see pictures of Stretford which are provided by:

"STRETFORD, a chapelry and township in the parish of Manchester, hundred of Salford, county Lancaster, 3½ miles S.W. of Manchester, its post town. It is a station on the Manchester, South Junction, and Altrincham railway. The village is situated on the Bridgwater canal, near the river Mersey, where the Roman way to Chester crossed. There is a large paper mill and a mart for pigs for supply of the Manchester market. The living is a rectory in the diocese of Manchester, value £150, in the patronage of the dean and chapter. The church is modern. The parochial charities, about £100 per annum, go to Hinde's school. Henshaw's blind asylum and a deaf and dumb school are in this township. The Independents, Wesleyans, and Primitive Methodists have chapels."

In 1835 Stretford was a township in the parish of Manchester.

You can see the administrative areas in which Stretford has been placed at times in the past. Select one to see a link to a map of that particular area. 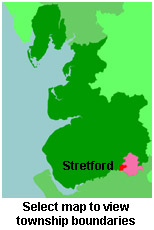 View maps of Stretford and places within its boundaries.